TAP Pool League Operator takes a pie in the face for Autism.

TAP Pool League Operator takes a pie in the face for Autism.

Members of the Route 19 TAP pool league along with local businesses partnered up with Lisa Hoffman and the Slippery Rock University Council for Exceptional Children to raise money for autism awareness. The benefit took place on April 3, 2011 at the Stanley Synder VFW located in Volant, PA.﻿

The highlight of the event was the “Pie in the Face” contest. The attendees got to purchase votes that counted toward their favorite candidate. The candidate with the most votes agreed to take a pie in the face for Autism Awareness.

George Natili, TAP Pool League Operator won by a land slide. There was a rumor that his wife, Nancy was seen stuffing the ballot box. Buck Rendos, an experienced pie thrower was randomly chosen to do the honor but he relinquished his privilege to Nancy, who graciously accepted. Robin Lynch, a popular VFW bartender was the runner up. She courageously agreed to take a pie in the face herself, rather than disappoint her fans.

Forty-two pool players mostly members of the Route 19 TAP Pool League paid a $10 registration fee in order to play in the Autism Benefit Pool Tournament. Fifty percent of the fee was donated to autism awareness. The remaining money was awarded to the first, second and third place finishers in each bracket. Some winners chose to donate back all or part of their winnings. 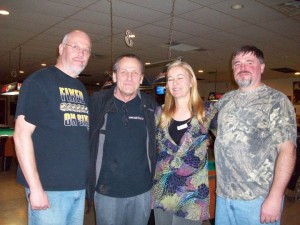 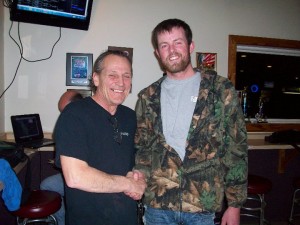 Congratulations to players Jeff Merchant (1st), Nancy Natili (2nd) and Jody Martin (3rd) who finished at the top of the 2-4 handicap bracket.

Many of the local merchants generously donated items for a silent auction. The items auctioned off included:

Cupcakes, cookies and pies that covered a table were welcome donations for a bake sale that aided the cause. 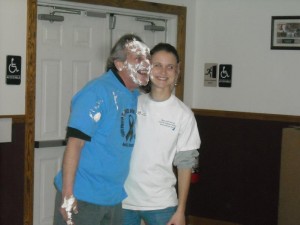 This entire event was skillfully organized by Lisa Hoffman pictured here. Getting a well deserved piece of her pie.

There were two fifty-fifty raffle drawings that took place during the event. Both lucky winners and Denny Sonntag chose to donate their winnings back as their personal contribution to the charity.

The event raised approximately $1,500 for Parents in TOTO, an Autism Resource Center in Zelienople, PA. The resource center is a place where the parents of children with autism go for support.

The generosity of the Route 19 TAP pool players demonstrates that TAP members are interested in more than playing pool. They are members of a pool league but more importantly, members of a community and dedicated to helping others.

This annual event is becoming a real crowd pleaser and attracts more participants every year.  What could be in store for George next year’s event, a dunk tank?