New Brunswick, New Jersey- For the sixth straight year, Dragon Promotions will produce the 71st Annual World Tournament of Straight Pool .  In partnership with the support of Dr.Michael Fedak, this year’s event will have the biggest payout in straight pool history with $20,000 going to the champion. The event is $35,000 added , boasting a total $70,000 in the prize fund. The luxurious Hyatt Regency in New Brunswick, NJ will host this year’s event starting August 28 through September 2, 2011. Once again the greatest straight pool players from around the world will arrive on USA’s east coast again to New Jersey, and attend this prestigious event to play for the coveted title of World Straight Pool Champion.

The World Tournament is the oldest tournament in history that still exists today. Invented by Jerome Keough and shortly after recognized as the official game of billiards. The first World 14.1 Tournament was held in 1911 and won by Alfredo DeOro. In its history due to war and economics, the World Championships had 29 tournaments that did not take place including a 15 year gap between 1990-2005 until Dragon Promotions revived the game and the World Tournament in 2006.

“This is my absolute favorite game, and this is my favorite event in the world. The World Tournament is the ultimate straight pool event, and the oldest testament of skill there is in pool. Dragon Promotions have been terrific caretakers of this prestigious championship, and I am pleased to help them continue the longest running tournament in history”, said Dr.Michael Fedak, the event’s patron sponsor. This year marks the 71st World Tournament , and stars such as Two-time World 14.1 Champion Oliver Ortmann will come back to defend his title along with former World Champion Thorsten Hohmann,  Niels Feijen, Allen Hopkins, Jasmin Ouschan, Johnny Archer, Mika Immonen, John Schmidt, and Stephan Cohen of France are just a few of the powerful list of world beaters who will come to play in the greatest straight pool tournament in the world. Players may also join qualifiers to get a chance to compete in the World Tournament with all the legendary greats. Qualifier info will be announced shortly and later can be found at www.DragonPromotions.com  To host a qualifier or play, contact worldstraightpoolchampionships@gmail.com

The  World Tournament Champion will also have his/her name inscribed on the 14.1 Champion’s Cup alongside the names of previous winners such as Mizerak, Sigel, Mosconi, Hohmann, Ortmann, Feijen, and Cohen.

“The World Tournament till this day has proven to have the most passionate fans and players. Myself and our staff at Dragon Promotions have really come to a true appreciation of this game and its rich history. We are very proud to have become the caretakers of this prestigious event”,  said Cindy Lee, CEO of Dragon Promotions.

Fans and players can make hotel reservations now at the Hyatt Regency by calling 732-873-1234 ask for “US Pool Players” Group and receive the tournament rate of $105 per night. Vendor spaces are also available, please contact dp.sally@gmail.com

The 2011 World Tournament is proudly co-sponsored by Amsterdam Billiards and straight pool aficionados Bill Austin of UT and Ralph Rubin of MD.   For more information on player registration, sponsorship, or if you would like to submit a comment, please email worldstraightpoolchampionships@gmail.com or contact Dragon Promotions at 1-407-782-4978.
Full event info is at www.dragonpromotions.com 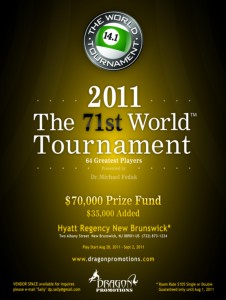