MELLING BY A MILE!

Story and Photos
by Ted Lerner (Shanghai, China)–Give Chris Melling an inch, and he takes a mile.

Thatâ€™s just how Chinese Taipeiâ€™s Hsu Kai Lun must feel right now, as the burly Englishman put on one of the most powerful displays of 9-ball pool seen in the professional game in some time, capturing the China Open in an all out rout, 11-3.

Melling won $40,000 and, in the process, declared loud and clear that he will be a force to be reckoned with among an already strong heap of English and EuropeanÂ  pool players for the foreseeable future.

â€œThatâ€™s the best Iâ€™ve ever played,â€ an ecstatic Melling said moments after lifting the trophy. â€œI knew I would win the match when I was up 6-2. I knew then it would be tough for him to come back. I was just playing too good.â€

Anyone who happened to catch one of Mellingâ€™s matches inside the Shanghai Pudong Yuanshen Stadium yesterday and in the semi-final today could see he was the clear favorite to take the crown. The Englishman, who was twice a world champion in English 8-ball and has only been playing competitive 9-ball for two years, was literally oozing with confidence. Everything about himâ€”the way he walked around the table, his extremely fast play, the way he stared downÂ  layouts and especially the audacious way he potted difficult balls and moved the cue ball aroundâ€”spoke of a man with a winning attitude.Â  He never gave his opponents any breathing room, pounced on the smallest of mistakes and quickly put racks on the board.

Hsu must have not had time to realize what hit him. The 22 year old Taiwanese had literally come out of nowhere to reach the finals of the China Open. Heâ€™s ranked number ten in Taiwan but he had never before played in an international menâ€™s event. Still he showed some of the same powerhouse skills that Melling had exhibited when he blew out the Philippines Ronnie Alcano earlier in the day, 11-3.

It didnâ€™t take long into the final race to 11, alternate break match to realize, though, that Hsu was in over his head on this day against the white hot Englishman. The two were all square after four racks but from there Melling got on his motorcycle and ran away with the match.

In rack five, Melling made a very difficult pot on the one that opened up the rack and got him the lead. In the next frame he played a world class snooker off of Hsuâ€™s safety that quickly led to another point. A minute later he was up 5-2 after a break and run out.

From there, the fast playing Brit piled on the points, all the while taking on and converting daring shots that most players would be afraid to pull out of their bags. Hsu simply had no answer. Melling raced right to the finish line and the championship with a resounding 11-3 win.

Coming on the heels of his quarter final finish in Mayâ€™s World 10-ball championship in Manila, Melling is sure to crack the World Pool Associationâ€™s Top Ten rankings.Â  The European number two is also looking very seriously at a spot on the coveted European Mosconi Cup team.

With this extremely impressive performance in Shanghai this week, the 32 year old Brit appears to have a very bright future in pool. Listen to his attitude when he talks about playing in the pressure cooker that is the world of professional pool.

â€œI didnâ€™t feel nervous at all out there,â€ Melling said.Â  â€œI love playing under pressure. I love the crowd and playing on TV.

â€œIâ€™m not saying Iâ€™m a great player. But thereâ€™s a difference between being a good player and being a great player. A good player can play well in the pool room and in small tournaments. Great players can win under pressure in an atmosphere like this. Iâ€™m just beside myself right now. Absolutely unbelievable.” 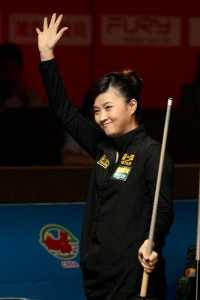 With her impressive victory, Fu won $30,000 and cemented her status as Chinaâ€™s best player. She has now won two major tournaments in the last year, including the World 9-ball championship held last September in Shenyang, China.Â  In addition to stamping her class on the highly popular and competitive world of womenâ€™s pool in China, the victory now moves the 25 year old to the top of the world rankings.

The match, played in front of several hundred people inside the Shanghai Pudong Yuanshen Stadium, and an estimatedÂ  nationwide television viewing audience of over ten million people watching on Chinaâ€™s CCTV, was expected to be much closer. But the usually unflappable Chen made some uncharacteristic mistakes, all of which cost the 17 year old phenom dearly.

The two stars split the first four racks before Fu grabbed the lead and, from there, hightailed it all the way to the title. In the fifth rack Chen twice fouled, the last one leading to a nervy and difficult clear for Fu. In rack six, Fu and Chen engaged in a long safety battle, before Chen missed an open shot on the 1. Fu then ran out for a two rack lead.

Chen couldnâ€™t seem to get comfortable while Fu just stayed steady, and Fu soon went up 5-2.Â  Chen faced a pivotal rack in the next frame and after missing an opening on a long 1 ball, she went on to play a lock down safety that earned her the point. Little did she know, however, that it would be the last rack she would win.

Fu just refused to buckle and would hold a tight reign on the proceedings the rest of the way. A terrific long pot on the six down the rail won her the next rack for a 6-3 lead. Chen fouled twice in the subsequent frame and Fu moved up by 4. Then Fu broke and ran out to go on the hill.

In the final rack, Chen broke but got nothing down and left an open shot on the 1 ball. From there the balls presented a basic layout and Fu cleared to claim the title.

â€œI played really well,â€ Fu told a throng of Chinese media after the match. â€œThe pressure was big but Siming had some mistakes and maybe I have more experience than her in big events.â€

Chen claims $15,000 for getting runner up and will now move down to the second spot in the WPA world rankings.

To see all the stories from our extensive coverage of the 2011 China Open, please visit the official website of the World Pool Association: www.wpa-pool.com