USA’s Mike Davis made a valiant effort. The 9-ball player who picked up the game just a few years ago made it through the round robin with 5 wins and 2 losses. Then he defeated Shaun Wilkie 200-133, Earl Herring 200-79, demolished legendary Mike Sigel 200-79, weathered a tough 200-166 match with Charlie Williams before facing Hohmann.

Thorsten went undefeated in the round robin stages with a perfect 7-0 record and then defeated Dan Mastermaker 200-25, Dennis Hatch 200- 83, Steve Lipsky 200-116, and came back from a huge deficit to win a thrilling match with Filipino Alex Pagulayan 200-172.

The Germans have dominated the World 14.1  four out of six years now

In the finals, Thorsten took a commanding lead right away which included a 100+ ball run. Mike was never able to recover from this hit. Fatigue also was a factor on both players as they had already endured tough semi-final matches. They had both pocketed 1500 balls each over the 5 days.  Towards the end Hohmann needed less than one rack to win the match but missed 2 times unbelievably to close it out. Davis was in no shape to put any significant numbers up anymore, and Hohmann pocketed the final balls to claim the championship once more. Hohmann won in 2006 as well. 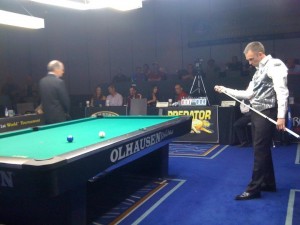 Dedicated fans stayed to the very end at 3:00am

“This is definitely one of the most significant accomplishments for me. I’ve won a couple big 9-ball events, but this is major for me to make it to the finals of the World Tournament”, said Davis in his speech to the audience afterwards.

“I felt very good coming into the finals. I ran a hundred balls in each of my single elimination matches (5 in a row). But Mike made a very good effort, so he should be proud of himself. This title means alot to me”, said Hohmann. With many 9-ball, 10-Ball, and 8-ball titles to his credit, he was asked was 14.1 his favorite game. His reply, “Oh yeahhhh!”

The 72nd World Tournament will be scheduled for summer of 2012. Dr.Fedak presents the prestigious World 14.1 Cup of Champions trophy. Hohmann’s name will be etched once again for 2011.

Checkout www.worldstraightpool.com for full group results and other 14.1 news from the event

For the sixth straight year, Dragon Promotions produced the 71st Annual World Tournament of Straight Pool .  In partnership with the support of Dr.Michael Fedak, this year’s event had the biggest payout in straight pool history with $20,000 going to the champion. The event is $35,000 added , boasting a total $70,000 in the prize fund. Predator Cues sponsored the event for the sixth straight year at the luxurious Hyatt Regency in New Brunswick, NJ.  The common goal of all the players that have traveled to the event will be to play for the coveted World Tournament of 14.1 title and be recognized as the #1 Straight Pool Player on Earth. The World Tournament is the oldest tournament in history that still exists today.