It was the 30th annual Music City Open at JOB Billiards Club in Nashville, TN held January 11-15, 2017. The event was sponsored by Budweiser, Alex Brick Custom Cues, Diamond Billiard Products, Simonis Cloth, The Accu-Rack by Outsville, and Rockinâ€™ Ray Hansenâ€™s poolactiontv.com. Rockinâ€™ Ray, Scott, and Schwartz covered all the action this year via live streaming on poolactiontv.com. Check out his site at poolactiontv.com.

Tournament Directors Steve McDonald and Bob Hunt had a very busy weekend, as a waiting list crowd showed up. Director Bob Hunt rode his motorcycle to the event from Memphis. Bob recently rode across country and was awarded the coveted â€œIron Buttâ€ Award. Congrats Bob!! A full field of 128 open division players and a field of 41 ladies division players convened at JOBâ€™s for the competition that was held on 7-foot Diamond Smart Tables with Simonis 860 Cloth.

Action got kicked-off Wednesday night with a 9-ball, race-to-7, single elimination mini tournament. A full field of 64 players entered this event and Nick Hickerson got off to a great start as he topped the field with a win after placing second last year in this mini. Second place went to Sean King.

The main tournament format is 9-ball, winner breaks, double elimination, race-to-11 in the Open Division and race-to-7 in the Ladies Division. This tournament has always been a full double elimination format, and this year, as usual, the Open went the full two rounds. There were a lot of break and runs too this year with the Accu-Rack by Outsville. Fans sure enjoyed seeing all the run outs!! 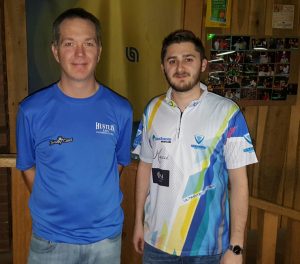 In the open division, past champion, Jonathan Hennessee, came from the one loss side to double dip last yearâ€™s winner Skyler Woodward in the finals. Roberto Gomez came in third and Shane Winters finished fourth for the second year in a row. In the ladies division, Allison Hardwick went undefeated thru the entire tournament to beat Jessica Mollinet in the final with Lisa Porter, who also played in the open division, finishing third and Birminghamâ€™s Robin Parker taking fourth. 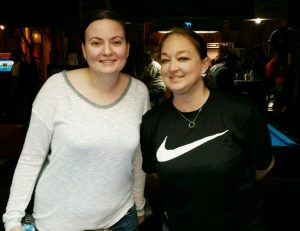 On Saturday night, it was the JOBâ€™s legendary Midnight Madness event. This is always an action packed event, and the crowd loves it. This year we had 8 top players in this single elimination format, race-to-11. It is a $500 entry fee, winner take all!! This yearâ€™s winner was Skyler Woodward to take home the $4,000 prize.

A beautiful $2,000 Alex Brick Custom Cue, one of the last that Alex made, was raffled off and given away just before the finals. The lucky winner was Shane Little from Cleveland, TN and he was present to collect his cue.

On a sad note, we lost former Music City Open Champion, Scotty Townsend, in a tragic motorcycle accident back in December. He was always a colorful character and sure added an upbeat tune to any tournament he was in. I personally loved to see him come to the table with only one cue, no break cues or jump cues, and believe meâ€¦..he was always a formidable opponent. Scotty will be missed by all.