The 19TH Derby City Classic started on Friday January 20th with 9-Ball Banks. The major sponsors were Diamond Billiard Products, CYCLOP Pool Balls, OB Cue and Simonis Cloth. The DCC consist of three events, which were played with CYCLOP pool balls on Diamond 9 foot tables covered with Simonis cloth. The event had a field of 435 players. The event was single elimination with one buy-back option at the discretion of the player. There was a re-draw every round of the remaining players after each round. 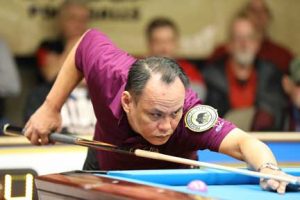 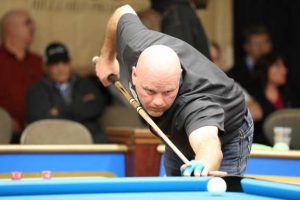 Rack four had Bustamante breaking and he drops one ball and misses his opening bank. Larry plays safe and rearranged the table. Bustamante plays safe tying up the cue ball. Nevel tries to play out but scratches, ball count minus one. Both players miss shots Larry has another unfortunate scratch. This eventually led to Bustamante taking rack 4 and tying up the match two all.

Congratulations to Francisco Bustamante for the second Derby City win in 9-Ball Banks.

Click on flyer to see full Story and Results