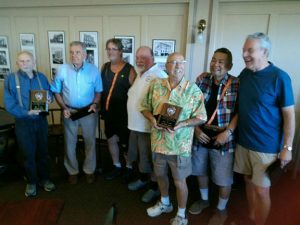 Our Tournament started in the Medford OR Elks Lodge in 1963, has evolved over the years, and moved to the Ashland Lodge with the closing in Medford. Originally it was an Elks event, with Lodges from all over the Country sending Three-Man Teams to represent their Members. Several times over the years we had over 100 Players enter this event, making it the largest 3 Cushion Tournament in the World at the time.

Father Time has taken its toll, we had just 20 Players this year. Now it is more of a reunion and a gathering of good friends for an annual camaraderie.

This year we had a couple of surprise guests, Max Fisher and his Wife Elaine, came from the Philadelphia area to celebrate his 85th Birthday. We had a cake and took them to dinner, it was great to see them! Also we welcomed back Carl Sellon and his sweetheart who we havenâ€™t seen in a while. They came to Ashland from Portland to visit and take in some of the local Culture. Ed McKibbon came up from the Bay area after missing about 15 years, and bought a new Kilby cue, which accounted for his good play!

We started Monday 9/25 and finished Thursday 9/28 with a banquet and raffle. This year we cleaned out the closet and put many memorabilia out in the raffle, including cues, cases, books, pictures, and other appropriate items. The funds went to the hosting Elks Lodge.

It is our goal to continue this event as long as there is interest; it is definitely up to you players to keep it going. You no longer need to be an Elks Member, we just want to add you to our group and enjoy your Company. All tournaments require work to get it put together, so the more the merrier. Hope to see more next year!