When you looked at the list of the final 8 players still in contention on the final day of the American 14.1 Straight Pool Tournament, Konrad Juszczyszyn would have had to of been considered a longshot to capture the winning trophy, especially when you reflect on the accomplishments of the other 7 players vying for the win. But that is exactly what Juszczyszyn did at the fabulous Diamond Billiards, and in doing so, claimed not only the trophy, but the $10,000 1st place award. 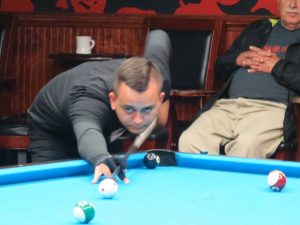 On a brilliant fall day in Midlothian VA, Konradâ€™s play was even more spectacular. Besides Juszczyszyn, the remaining players of a deeply talented field were Lee Van Corteza, Alex Pagulayan, Thorsten Hohmann, Albin Ouschan, Dennis Orcollo, Brandon Shuff and Warren Kiamco. But it was Juszczyszyn who went all the way to capture the title, downing Shuff in the quarterfinals, Kiamco in the semifinals and Orcollo in the tournament final. All races were to 150.

Quarterfinal action had Corteza, winner of the US and World 14.1 tournaments this year, facing fellow countryman Kiamco. Corteza was undefeated throughout the tournament but Kiamco got the best of him 150-111. Orcollo never gave Ouschan a chance to get involved, winning 150-0 that included a 95 ball run to end the match. Pagulayan played Hohmann and had a hammerlock on the competition at 113-13, but surprisingly missed a routine cut which allowed Thorsten back to the table and he cut the deficit to 112-38. One more trip to the table was all Thorsten needed as he produced a 112 ball run to eliminated the previously undefeated Pagulayan. Juszczyszyn meanwhile was taking out Shuff 150-76 in workmanlike fashion. 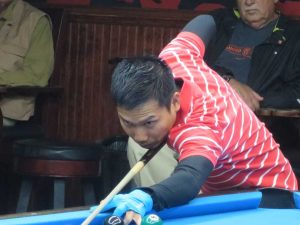 Semifinal matchups were Juszczyszyn vs Kiamco and Orcollo vs Holmann. Kiamco held a 104-22 lead over Juszczyszyn after 5 innings, but Juszczyszyn caught a gear to get within 141-111. Juszczyszyn then made a strategic decision to take a 3 foul penalty, and after Kiamco missed a long shot off the penalty break, Juszczyszyn ran 57 for the win. The other semifinal saw Holman race out to an 82-1 lead, but then Orcollo got to the table and began the journey of closing the gap, eventually taking the lead at 121-115 and won the match 150-130.

This set up an Orcollo vs Juszczyszyn final. When Dennis was asked before the match if he had ever faced Konrad, he indicated so and added he is â€œa very talented playerâ€. Similar his previous match, Dennis found himself in an immediate deficit of 106-19. While he was able to get the match to 106-87, Juszczyszyn was just too much and captured the title game with 44 ball run. 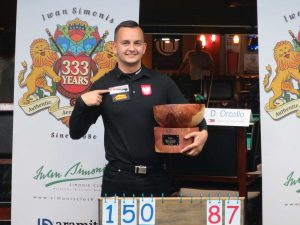 â€œI feel very fortunate to win the tournamentâ€ Juszczyszyn said. â€œI felt like I had luck on my side throughoutâ€. The bottom line is his play all week simply outclassed the field, finishing the tournament undefeated in both the round robin and knockout phases to notch his second victory on American soil. His first win was last year in the Gotham City 9-Ball Pro Classic. Despite that win Juszczyszyn, just 24 years old from Lubin Poland, came into this tournament completely under the radar. This win is sure to add his name to the list of young rising stars like Billy Thorpe and Eklent Kaci who have also won important events in 2017. Konradâ€™s playing style would make the late Lou â€œMachine Gun Louâ€ Butera smile. He plays fast, loose, and appears to fear no shot. After the tournament he immediately left for Virginia Beach to compete in the US 9-Ball tournament. His predominant discipline of play is straight pool, but he no doubt has the ability to compete and win in all games.