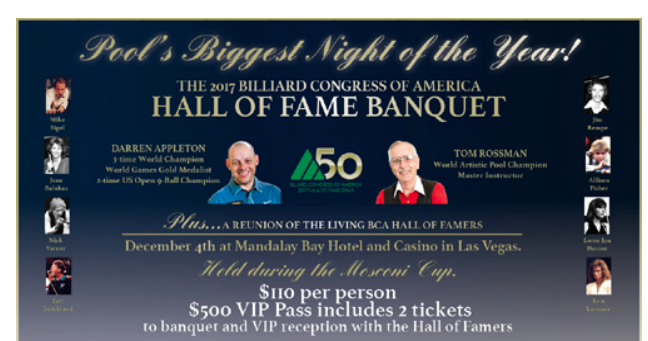 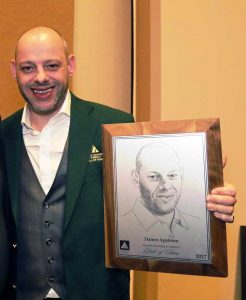 Superior, Colo., June 15, 2017 – The Billiard Congress of America Hall of Fame welcomes a transplanted English 8-Ball star and one of the sport’s most enthusiastic ambassadors to the class of 2017. The United States Billiard Media Association today announced that three-time World Champion Darren Appleton and “Dr. Cue” Tom Rossman have earned induction as the 69th and 70th members of the sport’s most prestigious hall of fame.

Appleton, 41, will enter the Greatest Players wing of the BCA Hall of Fame, while Rossman, 67, will be honored in the Meritorious Service category. Both will be formally inducted during ceremonies later in the year.

Born in Yorkshire in northern England, Appleton split his childhood between English 8-Ball, soccer and boxing. He compiled a 12-4 record as an amateur fighter and won the junior national English 8-ball championship in 1996, at 16. Four years later, Appleton decided to devote full time to his cue career, and over the next decade he was the top-ranked player in the world seven times.

In 2006, Appleton left the English game and traveled to the United States to participate in the short-lived International Pool Tour. Appleton’s American Pool career took off after his surprising win over Jiaqing Wu in the final of the World 10-Ball Championship in the Philippines. He followed that win with the World Pool Masters title in 2009.

Appleton won the first of his two consecutive U.S. Open 9-Ball Championships in 2010, and captured his second WPA world title in 2012 when he beat Hewen Li of China in the final of the World 9-Ball Championship. Showing a propensity for winning in back-to-back years, Appleton won the Challenge of Champions in 2011 and 2012, and the World Tournament of 14.1 in 2013 and 2014. Appleton’s 2013 straight pool win included a run of 200 and out against Francisco Bustamante, the highest recorded run in a major straight pool tournament.

He also scored one his great personal triumphs in 2013 when he edged Taiwan’s Jung-Lin Chang, 11-10, to win the gold medal at the World Games in Cali, Colombia. Appleton added the World Cup of Pool title to his resume in 2014, teaming with Karl Boyes. And in 2015, Appleton won his third world crown, this time capturing a world 8-ball title by besting World Snooker Champion Mark Selby in the final of the Chinese Pool World Championship.

“It’s really amazing to know I’m in the BCA Hall of Fame,” said Appleton from Yorkshire, where he was visiting his ailing parents. “I can’t really put it into words. To be playing American pool full time for only 11 years and achieve this recognition is incredible. There is no bigger honor for a pool player. This is the pinnacle. It’s been a difficult year for me personally, so this is the kind of news I really needed. I’m very thankful.”

Rossman was born in Minonk, Ill., and studied business management at Eastern Illinois University. But pool was always Rossman’s true passion and he has parlayed that love into a 40-plus year career as a competitor, promoter, innovator, teacher and ambassador in the sport.

dited with being the founding father of the modern day “Artistic Pool” movement. Rossman developed and promoted numerous events through the 1990s and was asked by then-World Pool-Billiard Association president Jorgen Sandman to help develop professional artistic pool competitions within the association’s worldwide federation and have the discipline formally recognized by the world organization. Rossman served as president of the WPA Artistic Pool Division for more than a decade. The WPA World Artistic Pool Championship was first staged in 2000, and has been held every year since. Rossman won the title in 2006, and was runner-up on three occasions.

Rossman’s efforts in organizing trick shots as a competitive discipline was also instrumental in the development of the ESPN Trick Shot Magic shows, produced by Billiards International. Trick Shot Magic continues to draw the highest ratings of any televised billiard programming in the U.S.

Rossman is a master teacher as well, certified as an Advanced Instructor by the Professional Billiard Instructors Association and the American CueSports Alliance. He continues to travel the country promoting the sport, reaching thousands of junior players and enthusiasts.

“I am humbled and honored to be elected into the BCA Hall of Fame,” Rossman said upon hearing the news. “Starting out as a rack boy at the age of 10 provided an initial foundation for my billiard journey. My wife and business partner, Marty, and I share the joy of the roll with players, fans and students of the game around the world. We have been actively involved with all facets of the billiard industry at the junior, amateur and professional levels for a long time.

“The Hall of Fame designation is extra special in so many ways. When a person connects with his or her dreams, visions, blessings and passions in a heartfelt manner, he or she may truly rack up a victory in the game and, more importantly, in life.”

Board, which consists of USBMA members, elected At-Large members and living members of the Hall of Fame. To be eligible for consideration in the Greatest Players category, a player a) must be 40 years old by Jan. 1 of the year of their inclusion on the ballot; b) must have a professional playing career of at least 10 years; and c) must have recorded significant achievements in U.S.-based and international events.

Rossman’s nomination was recommended by the Meritorious Service Committee, which also recommended George and Paul Jansco of Johnston City fame for consideration. USBMA members voted to included Rossman on the final ballot, where he was approved by the Hall of Fame Board.

Founded in 2007, the United States Billiard Media Association is a non-profit association dedicated to elevating the visibility and status of billiards in the media at large. The USBMA consists of professional print, radio, TV, public relations and Internet media persons who cover cue sports. One of the association’s main functions is electing of billiard media members to the Billiard Congress of America’s Hall of Fame Board for the purpose of nominating and electing players and notable figures to the Billiard Congress of America Hall of Fame.