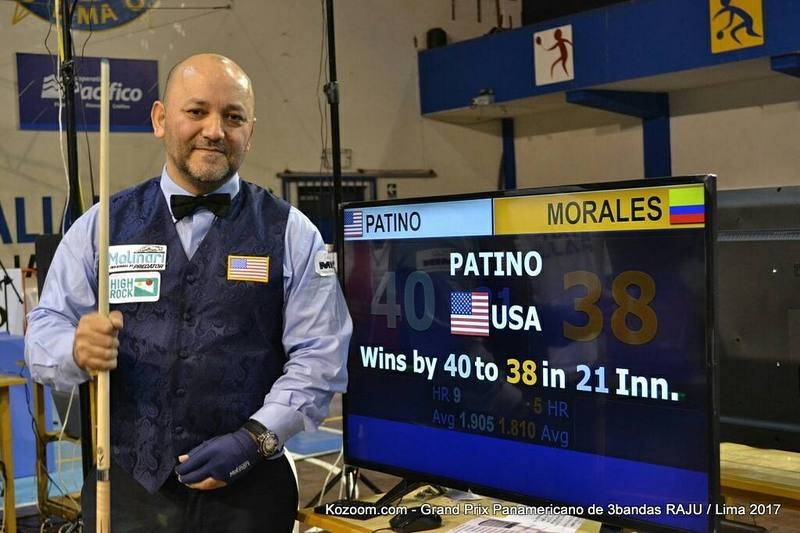 Hugo PatiÃ±o, second win in two years, best in a field of ten with 8 Colombians

LIMA – With his second win in two years, Hugo PatiÃ±o has been crowned king of billiards in Lima. The American extended his title in the Grand Prix Panamericano by a victory over Robinson Morales in the final: 40-38 in 21 innings. The born Colombian was rewarded with 5.000 dollars in the tournament which was excellently organized by RAJU Productions (Ramon Rodriguez and July Pinedo).

The opening stage in the final was dominated by Hugo PatiÃ±o, who attacked with nine after a miss in his first inning. He led 16-6 on the way to the break. Morales prepared his counter, but was still behind at 22-14. The Colombian, best player on average, went full speed after the break, levelled the match in the 16th and then led by 30-28 one inning later: 30-28. The American eventually decided the hard fight leading 35-30 and was a little more lucky to reach the finish: 40-35. Robinson had to score five for the tiebreak in the equalizer, but missed after three points: 40-38 in 21 innings.

Robinson Morales, nicknamed Robin Hood, was never in danger in the semi-final against Luis Aveiga. The American ran out to a smooth win from 17-13 and 34-21 to 40-21 with a final run of six. Hugo PatiÃ±o also showed superior against Luis Martinez, led 20-10 at the break and decided the match in the 26th: 40-27.

Six Colombians, one Ecuadorian (Luis Aveiga) and an American (Hugo PatiÃ±o) were the eight finalists on the last day. The best winner in the eighth finals was PatiÃ±o in his match against Julian Torres (40-23 in 23 innings). Alexander Salazar signed for the elimination of Henry Diaz (40-34 in 27), other favourites who were outplayed were Carlos CampiÃ±o and Jose Torreblanca, the last of the Peruvians.

The quarter-finals were spectacular. Robinson Morales was 20-7 down against Jose Juan Garcia, but decided the match in his favour at 40-36 in 24. Luis Aveiga started as a rocket (19-8 in 7), but Julian Morales came close: 40-32 in 26. Huberney CataÃ±o couldn’t find his rhythm in the match against Luis Martinez (17-5 and 27-13 down), still played a draw, but in two shootouts he lost 3-2. Hugo PatiÃ±o played a tough match against Alexander Salazar, he escaped at 40-39 after 38 innings.

The Grand Prix Panamericano took place in the Circolo Sportivo Italiano with a maximum internet connection to broadcast the eight matches. The best overall average was made by Robinson Morales 1.701. The highest run was made by Alexander Salazar: 14.