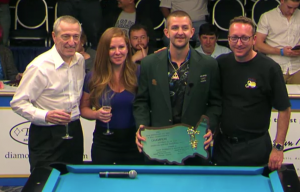 The final day of the 2017 U.S. Open gave up some of the finest pool ever seen with unbelievable shoemaking and impossible reaches of position.

The day began with the hot seat match between Jayson Shaw and Francisco Sanchez-Ruiz. These two kept it close early, with the two men trading racks until the score line got to four games apiece. Jayson Shaw then waved at his young daughter in the stands and he caught fire. From there it was all the Shaw show as he took on table-length razor cuts, jump shots, and wove through heavy traffic for position. There was just nothing Francisco could do as Shaw commanded the table. The match ended with Shaw an 11-4 winner.

The ‘B’ side match to determine our fourth place finisher was between Jung-Lin Chang and Eklent Kaci. They also kept it close early with the score reaching a tie at 7 games apiece. Eklent then took charge and dominated the table with precise, no-mistake pool. Plus, his break began to work and gave him layouts that he could manage without needing miracles from above. Kaci won this one 11-8 and Chang took fourth place after finishing second here last year to Shane Van Boening.

Our semi-final match featured Francisco Sanchez-Ruiz and Eklent Kaci. This match was something of a contrast in styles as Francisco hurries around the table and Kaci strolls slowly. Ruiz took first blood in this one but gave up ball in hand in the second rack when he missed a fairly routine short kick to contact the two ball. However, he was able to get back to the table after a safety war and win the rack to go up 2-0. He then broke and ran to go up 3-0.

A scratch on the next break got Kaci out of his chair. He ran the table to get on the board 3-1. When he broke and ran the next rack he trailed only 3-2. They then traded racks for a 4-3 score. The score was quickly tied at 5 racks each and the players then once again traded racks to tie at 6.

Kaci then began to take control of the table and won the next rack, then broke and ran the next three to arrive at the hill 10-6. Kaci had no run out in the next rack but he gave Ruiz no air. Ruiz’s best opportunity was a jump-bank shot that failed to find the corner pocket and Kaci looked poised to take it home. To everyone’s surprise, Kaci missed the eight ball and gave Ruiz life at 10-7 and breaking.

Ruiz made a legal break but had no shot on the two ball. Kaci emerged the winner of the safety engagement that followed and ran out to gain entry to the final match with Jayson Shaw. Francisco Sanchez-Ruiz settled for third place.

Our Grand Final, a race to thirteen games, between Kaci and Shaw began with Shaw winning the lag.

All of the balls wound up on the right side of the table. Shaw played safe on his first shot Kaci could not escape well enough and Shaw quickly ran the table for the first mark. The second rack was a bit of a back and forth affair but Shaw once again prevailed. Shaw broke and ran the next rack but the break on the fourth rack once again found all of the object balls on the right side of the table and the cueball locked in a pocket’s jaws. He pushed but it was handed back and he banked the one ball safe. Kaci missed the contact on a thin safety nick and Shaw ran down to a three-nine combo. He made it to go 4 up on Kaci who was yet to drop a nine.

Shaw then broke and ran for game 5 and was shooting a perfect 1000 on Accu-Stats at this point in the match. In the next rack, Shaw missed a thin cut on the one but left Kaci hooked. Kaci grabbed his jump cue and made the jump but snookered himself. On the safe attempt Kaci failed to hit a rail and Shaw took off with ball in hand and rode the gift through the rack for 6-0.

Now remember that at the World Pool Series event a few months back where Kaci got his first major victory, it was Shaw who was on the losing end of that match. Shaw had a point to make this time, and the fates seemed to be with him. He left the two ball in a corner pocket and Kaci had to go rail first to make contact and instead struck another ball while trying to execute that and once again gifted Shaw with ball in hand. Once again Shaw ran the rack out for 7-0.

Commentator and Coach Mark Wilson was so impressed with Shaw’s game that he said: “Perfect position for Shaw is when the cue ball and the object ball are on the same table”. 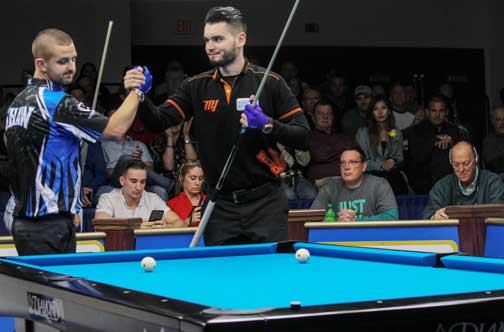 Kaci was at the table briefly to try a jump shot but left Shaw out and it was quickly 8-0. Now folks began to remember how Corey Duel had blanked Mika Immonen in his victory here. Immonen did nothing wrong. He just could not get out of the chair with a hope of a shot, and Kaci had done little wrong other than to have his arm ice up a bit from sitting in the chair so long.

Shaw finally showed that even he can err. He missed a carom but Kaci had to play a safe. It was effective and Kaci removed the remaining five balls to clamber up onto the scoreboard and hear applause for the first time. Now Kaci needed to stay at the table, run balls and make points. His break left him no clean shot on the one ball. He pushed out to a jump shot that Shaw gave back to him. Kaci made the jump shot and warmed his arm up with some tough shots on his way to his second point. 8-2. 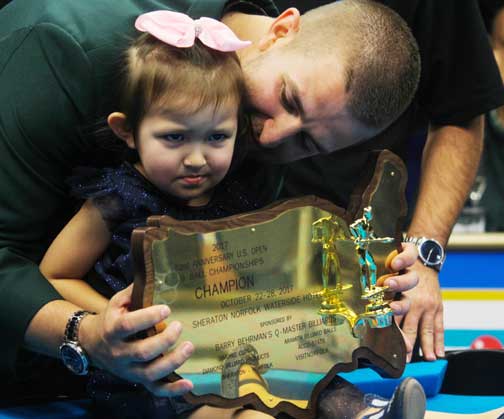 Kaci broke dry in rack 11 and Shaw took the floor and the rack to lead 9-2 in our race to 13. Shaw then broke and ran again for 10-2. Now he was showing a 938 Accu-Stats TPA. Shaw then made the nine on the break for 11-2. He was using a cut break and cue ball came right back into the nine and knocked it in.

Showed played safe on his first shot in the next rack and Kaci grabbed his jump cue. He made a great shot and gave the safety right back. Now Shaw went for his short stick. He had to jump a long nine ball and instead his cue ball left the table. He left a shot for Kaci and Kaci ran the table for his third win.

Kaci could not keep the table in the next rack and Shaw got to the hill at 12-3. Shaw scratched on the next break and left a pattern for Kaci to follow for a 12-4 scoreline, but Kaci then scratched on his break and the result was obvious. Shaw took the rack and the crown of 2017 U.S. Open Champion with a winning score of 13-4 over Eklent Kaci