(Doha, Qatar)– For the last 12 years the Philippinesâ€™ Carlo Biado did everything he needed to do to put himself on the road to being a champion. He dedicated endless hours in practice, money games, tournaments, and worldwide travel all in the hopes of one day reaching the top of the sport. And he also endured plenty of massive disappointments and near misses in big time events, including in more than a few world championships. 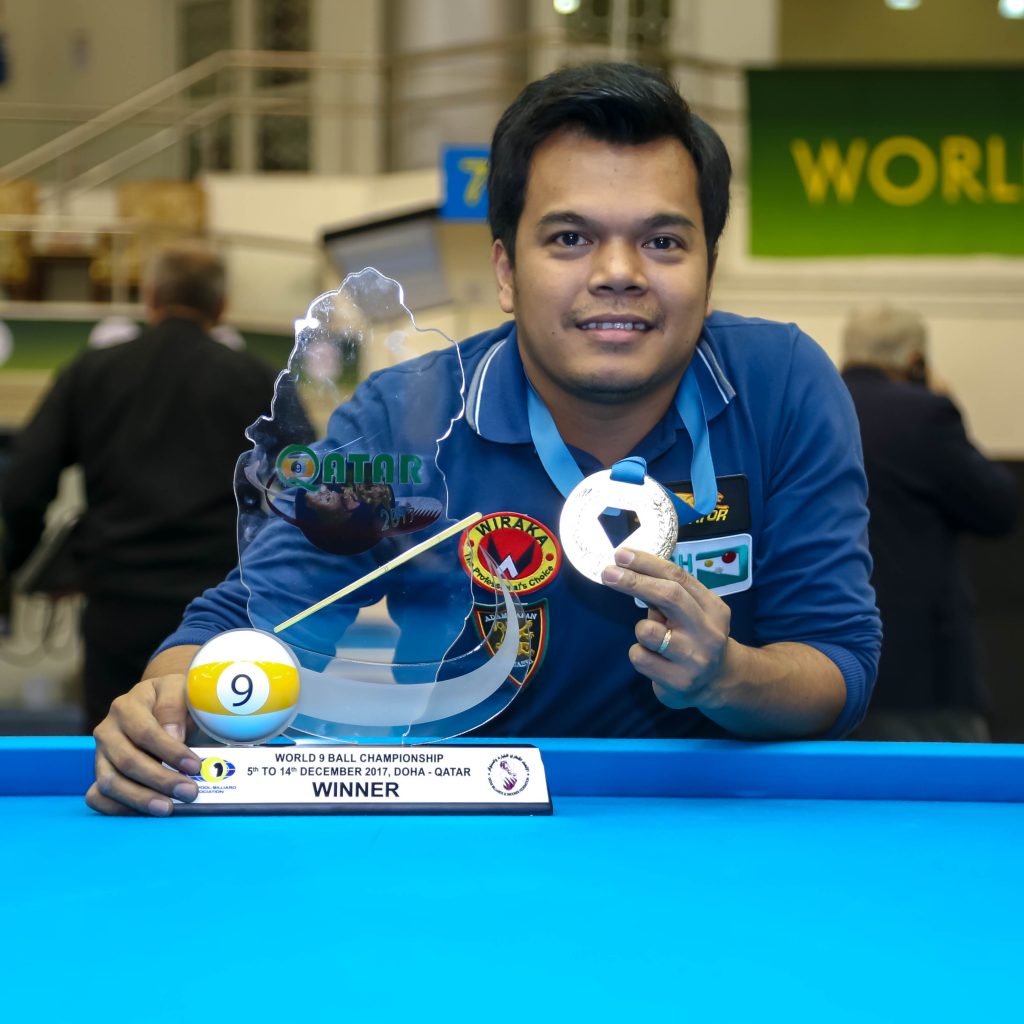 Those hard knocks and long days and nights finally paid off on Thursday afternoon in Doha, and in the biggest way possible, as Biado captured his very first WPA World 9-ball title, after a relatively easy 13-5 victory over fellow Filipino Roland Garcia in the final.

One could easily see the sense of relief and triumph on Biadoâ€™s face as the last nine ball fell and he realized he had finally accomplished his long cherished goal. Only two years ago, Biado came within a whisker of winning the World 10-ball crown in the Philippines, only to lose right at the wire to Taiwanâ€™s Ko Pin Yi.

The humble and smooth shooting Filipino kept at it, however, and dedicated himself even more. He finally got his US travel visa and honed his skills in the States. Earlier this year he achieved his biggest triumph to date when he won a gold medal at the World Games in Poland.

It was clear all week in Doha that that win in Poland this summer had infused the Filipino with the type of confidence that would soon take him all the way to the pool mountaintop. With a dead-eyed, smooth stroke, cool demeanor and fast pace, the 34 year old Biado has all the tools and time to take this win to even further heights of greatness in the coming years.

For Garcia, his appearance in the final was a welcome revelation to pool fans who may never have heard of the hot shooting 36 year old. He grew up in the same Philippine town as the legend Efren Ryes, and learned much of the game from the Hall of Famer. Those who knew Garcia knew he always possessed surreal skills, and he was a favorite on the Philippine money game scene for years. In 2006 he played in the World Pool Championship in Manila but was way in over his head and fell out in the group stages. He had never produced much on the tournament circuit until he began traveling more in the last three years and he started to get some results. He has spent the last two years living and working in Thailand as a house pro.

This was Garciaâ€™s first ever trip to the World 9-ball Championship since the event came to Doha in 2010 and what a week it was for the Filipino. Up until the final Garcia produced one master class after the next, including beat downs of Niels Feijen, Ko and young gun Klenti Kaci. Thereâ€™s no doubt the pool world will be hearing more from this exceptionally talented Filipino.

That two Filipinos ended up in the final of the World 9-ball Championship may have been a happy coincidence for Pinoy fans around the world, but it was certainly far from a guarantee when play began at 10am local time on Thursday. Thatâ€™s because the two opponents of Biado and Garcia were also playing lights out throughout the week here.

Biadoâ€™s opponent, Wu Kun Lin, has, over the last six months, established himself as the new man to beat among a plethora of incredible Taiwanese talent. The 22 year old from Taipei had recently grabbed semi-finals spots at the China Open and the World Pool Series and looked primed for a possible finals spot today. But several racks into their match today were enough to show who was boss. Biadoâ€™s experience was telling and he grabbed an early lead, pounced on several of Wuâ€™s errors, and played brilliant 9-ball to win going away, 11-6.

On the TV table at the same time, Garcia came into his match with the Albanian Kaci a slight underdog and justifiably so. Kaciâ€™s clinical style has proven impenetrable lately and in just a few months the 18 year old has rocketed to an unlikely spot at the higher echelons of the pro ranks. But the Filipino didnâ€™t let a few early mistakes get him down and once he found his rhythm, he produced a breathtaking performance that was as good as one could ever want to see. Garcia blew away Kaci in the blink of an eye, streaking to an 11-6 win and a spot in his very first world championship final.

With two Filipinos going for the title, the intensity and drama that is usually associated with a World 9-ball final seemed to be missing even before the race to 13, alternate break match began. The great Filipino players always travel together, and all of them are friends. And while each dearly wanted to be crowned world champion, the match seemed to proceed at a more casual pace than otherwise would have been.

Biado quickly established his control of the proceedings and never looked back. After taking the first two racks, Biado pounced on three straight glaring mistakes from Garcia to quickly move up 5-0. Slick shooting by Biado and another mistake by Garcia brought the score to 7-0. Garcia notched his first rack to make it 7-1, but a poor safety by Garcia led to another Biado frame and an 8-1 lead.

Garcia seemed to mount a comeback and won two straight to make it 8-3. But a break and run by Biado and an inadvertent scratch on the break by Garcia put the score at 10-3. Biado then moved it to 11-3 before Garcia countered with two of his own. At this point, however, the result was just a formality and indeed Biado quickly closed the deal. He wrapped up the proceedings with a fine break and run to claim his very first World 9-ball title.

Afterwards, as he posed for photos and celebrated with the many overseas Filipinos who live and work in Qatar, the new World Champion couldnâ€™t help but think back on what had brought him to this very moment.

â€œIâ€™m very very happy right now,â€ and overjoyed Biado said. â€œItâ€™s been a long time. I worked very hard, had many disappointments. And now finally I won the world title.

â€œIn the semis I had a bit of pressure against Wu but I got lucky in one of the racks when I missed the bank shot on the four ball but it went in the other pocket. So I got lucky.

â€œThere was less pressure in the final because even if I donâ€™t win, at least a Filipino will get the title. I was very comfortable thatâ€™s why I played well. Also the balls were always in an easy position after the break.

â€œWhen I won the world games there was a lot of pressure, more than here because there were so many people watching. After I won in Poland against Jayson Shaw I just felt so good and so much more confident when I entered other events. That was a really big help to my confidence and I know it definitely helped me this week and today.â€

For Garcia, the loss after being on the cusp of an unlikely world crown didnâ€™t seem to sting too much. He was just happy that a Filipino had taken the title. And he was sure to use the experience to achieve success in future events.

â€œItâ€™s still a wonderful feeling to be a part of this prestigious event,â€ Garcia said. â€œAnd the fact that my friend and fellow countryman Carlo wins means Iâ€™m also a winner. Iâ€™m very proud of Carlo. He deserved it more than I do.

â€œI had mixed emotion going into the final playing another Filipino. Itâ€™s not easy. And the pressure didnâ€™t seem like it was there like in other matches. Of course I was trying to be the world champion but I started out with a few mistakes and he took advantage and that was it. Anyway, Iâ€™m really happy. This is my first time that I joined this event and I made it this far. Hopefully next year I can use this experience to have more success in future tournaments.â€

For now, though, it was Biadoâ€™s time to take a bow. When he was reminded that he now joined Filipino greats Reyes, Francisco Bustamante, Alex Pagulayan and Ronnie Alcano as World 9-ball Champion, all he could do was think back on all the difficult toil that had brought him into such illustrious company.

â€œIâ€™m so proud to be one of them. This is the best thing that could ever happen to me. I have worked very hard for many years and now my dream has come true.â€

The 2017 World 9-ball Championship was hosted by The Qatar Billiard and Snooker Federation(QBSF), and is sanctioned by the The World Pool Billiard Association, the governing body of the sport of pool.

Fans can interact with us through the WPAâ€™s official Facebook Page for the event at this link;https://www.facebook.com/worldpoolbilliardassociation/ 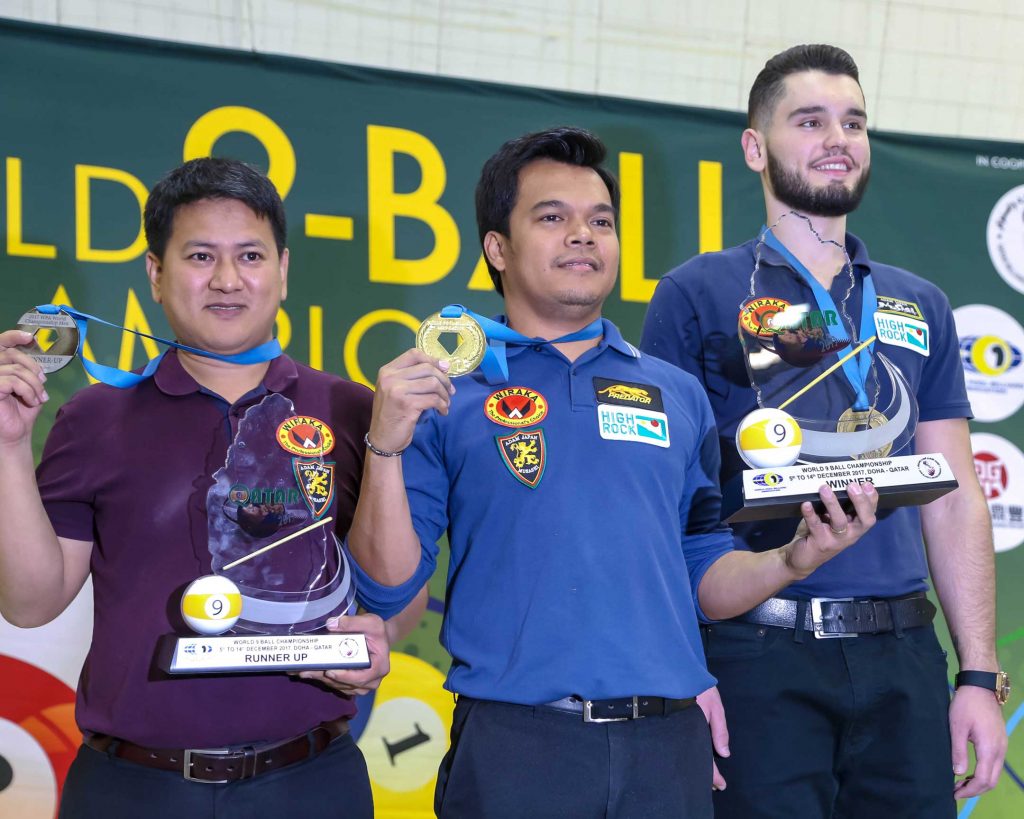