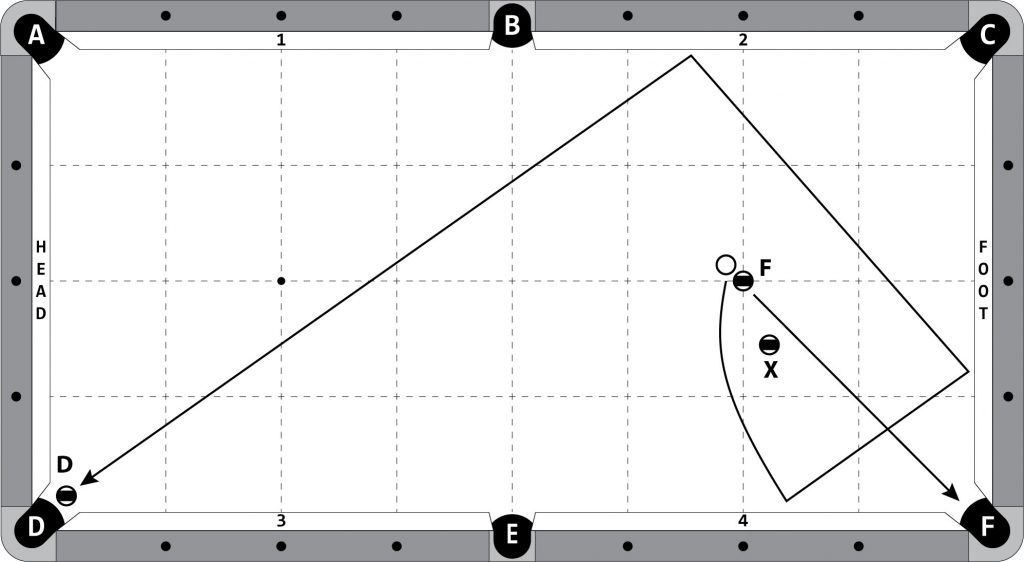 A fouette is a â€œwhip shotâ€ used when the cue ball and object ball are close together which makes it easy to keep spin on the cue ball. It is also used in ballet to describe â€œwhipped turnsâ€ where the dancer whips their leg around performing a pirouette. These can be some of the most difficult shots to learn, but look impressive if you can get them down.

This particular shot is an easier variation where object ball F is on the spot and the cue ball is a few millimeters away. Ball C is hanging in the corner pocket and ball X acts as a blocker but also adds a nice visual effect as the F ball and CB travel on opposite sides of it. The goal is to pocket ball F and have the CB whip around ball X, spin off three rails and pocket ball C.

To execute this shot, aim 3/4 ball off to the right side of F. It helps to use a little elevation, jacking up about 15-20 degrees. Use 1/2 tip of follow and maximum running (left hand) english. The hard part is the stroke, you need to hit it pretty hard to impart enough spin and speed to carry the cue ball around the table. Any imprecision while shooting hard will ultimately get magnified and result in a miss.

Players who come from a typical pool playing background can have psychological barriers to making this shot fearing a double hit. By aiming to right side of F, the CB will carom off to the right while your cue stick will deflect to the left, keeping them separated. The spin will take shortly afterwards creating a visually pleasing arc before the CB speeds away.

Start with a decent CB-OB gap of 5-10 mm and work your way down to 2-3 mm. The larger the gap, the fuller you have to aim on the OB. If the CB slides too much, aim fuller as well. Keep a loose grip and remember to follow through.