The quarter final line up at the 2018 World Cup of Pool is now complete as the remaining three second round matches concluded at the Luwan Arena, Huangpu District in Shanghai. The USA, runners-up at last yearâ€™s event, made it through as they got the better of a Finnish pair who won the event in 2012.

In the second match Spain eased through ahead of Sweden while the final game saw home favourites China A put paid to the hopes of the final non-seeded country left â€“ Australia.

Having tripped up at the final hurdle at the York Hall last June, Shane Van Boening and Skyler Woodward are two matches away from another crack at the title following a 7-5 win over Sweden, Petri Makkonen and Mika Immonen. 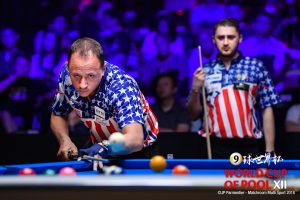 Commented Van Boening, â€œWe felt uncomfortable at the beginning but at the end of the match we battled out the safeties and we won from there. I love playing with Skyler, we have been friends for ten years and have played a lot of tournaments together. We always have fun and that is the important thing.â€

Woodward was looking ahead to their last eight match against Chinese Taipei; â€œIt doesnâ€™t matter that Chinese Taipei have played well because they are playing us next. We played better than in the first match and we will get better and better.â€ 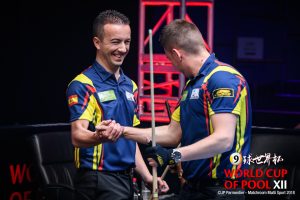 In the second match, Spain beat Sweden 7-3 and never really looked under any pressure to complete the win. David Alcaide has had a consistent career in the World Cup of Pool but this year, in the company of Francisco Sanchez Ruiz, they look to be real dark horses.

â€œIt is the first time Spain have reached the World Cup quarter-finals. We did a good job against Sweden, it wasnâ€™t an easy match. We have a good feeling at the table but now the most important thing is we focus on the next round,â€ said Alcaide. 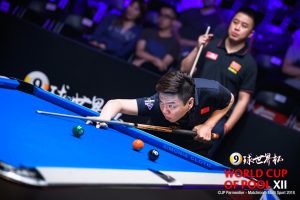 In the final match, China (Wu Jiaqing and Liu Haitao) strolled to a 6-0 lead over unseeded Australia before staging a mini collapse as they missed everything possible to let the Australians back in. The Australian pair of Justin Sajich and James Delahunty took the opportunity to claw it back to 6-4 but the bridge was just too far as Wu ended proceedings with an 8/9 combo.