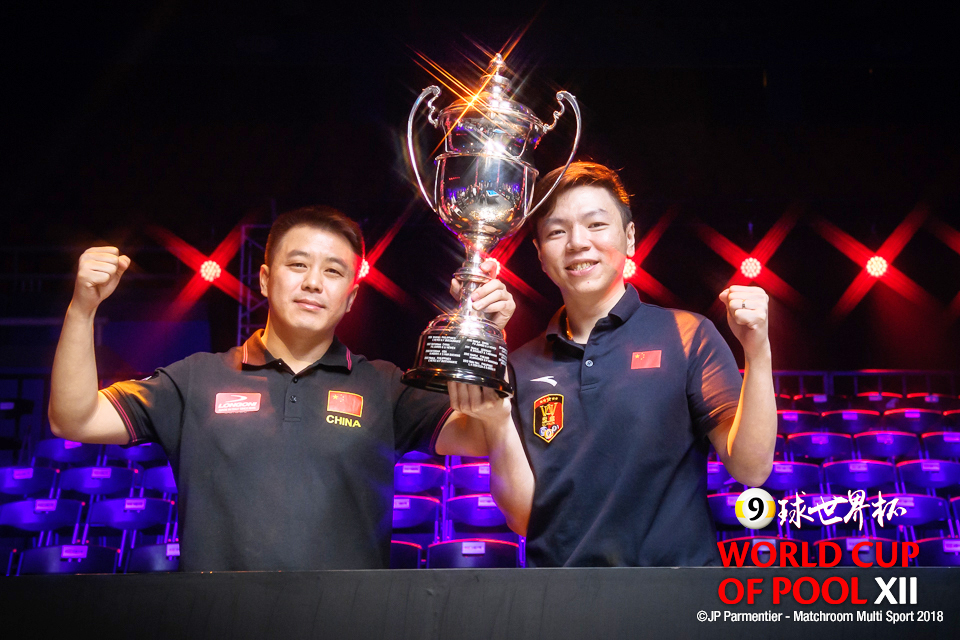 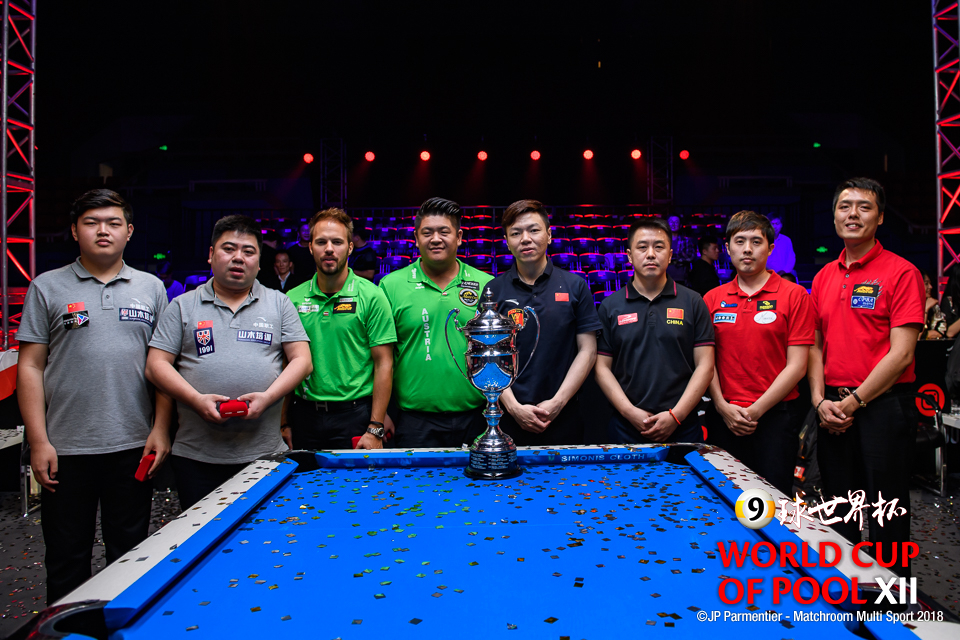 It was after the final but semi final line up.

China are the 2018 World Cup of Pool Champions after they defeated defending champions Austria by 10-3, the biggest winning margin in the events race-to-ten era. The team of Wu Jiaqing and Liu Haitao dominated the Austrian pair of Albin Ouschan and Mario He to the delight of the crowd at the Luwan Arena, Huangpu District in Shanghai.

The winning pair earned $60,000 between them, two gold medals and the magnificent trophy. It was the third World Cup of Pool victory on home soil following the Philippines in 2009 and England in 2014.

The victory also equals the Philippines record of three World Cup of Pool wins following wins for China in 2007 in Rotterdam and 2010 in Manila. Commented Liu, â€œI have played

Matchroom tournaments before but never had a good run like this. I cannot remember how I played, it is a bit of a haze, but I must thank Wu as well.â€

Wu added, â€œI am really, really happy to win this tournament. I had never played with Liu as a doubles partner so we were working on the chemistry from day one and the first few matches we struggled but in this final it was a really brilliant performance.â€

Austria, whose epic semi-final against China B had ended just an hour earlier, took the opener but a lucky safety from the Chinese forced a scratch from Ouschan and the Chinese levelled it. They then grabbed the bull by the horns with two straight break and runs to go into a 3-1 lead. A missed 6 in the next rack from Liu gifted it to Austria but in the next Mario He missed the 2 ball with an open table and that allowed China to go to 4-2.

China had the initial chance in rack seven but a rare misjudgement from Wu with an overhit positional shot placed his team mate in a snooker. Austria took advantage to go 4-3 and should have drawn level but for a positional error from 8 to 9 in the next. He tried to bank the 9 ball and left it on the rail with the cue ball close.

Wu stepped up to the plate and made a magnificent table-length bank shot to make it 5-3. There was more misery for Austria in the next as Wu fluked a snooker to give them the advantage and leave Austria looking at a 6-3 deficit. That was the Austrianâ€™s last contribution to the match as the Chinese duo broke and ran the next four games to take the title.

After glory in London last year, Austria came so close to being the first team ever to retain the World Cup of Pool title.

Ouschan said, â€œThey played great the whole match. We had seen their semi-final and they played well so we knew they were in good shape and in their comfort zone. We were hoping for a chance, we had one and didnâ€™t use it and that was it.â€

In the afternoonâ€™s semi-final matches there was high drama as Wang Ming of China B missed match ball to present the tie to Austria. The match had been an absolute thriller with China B taking it to the Austrians as they reached the hill at 8-5.

The super-calm Austrians played within themselves to claw the racks back and they managed to tie things up at 8-8. A dry break from Mario He gave the Chinese their chance but when Kong Dejing pocketed the 8 ball, he left cue ball tight on the rail. Wang wasted no time sizing the shot up but missed a absolute sitter to hand a spot in the final to the Europeans.

China A had looked in top form as they disposed of Chinese Taipei in the first semi-final. Wu Jiaqing lead the team from the front as they kept one step ahead of the opposition to