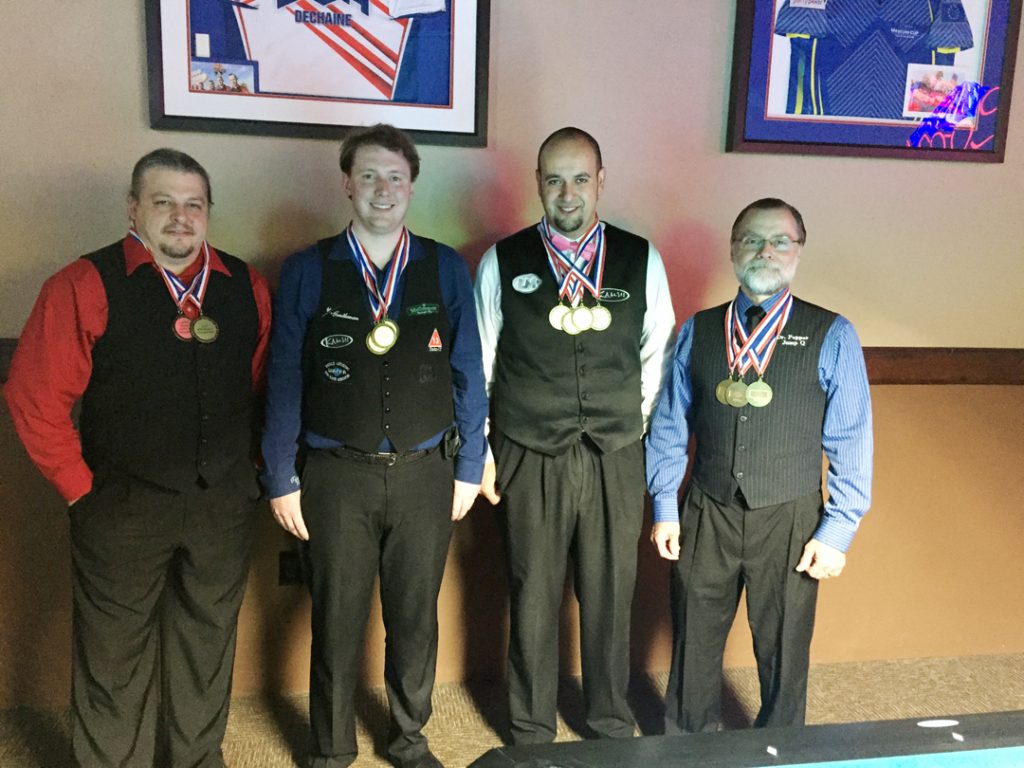 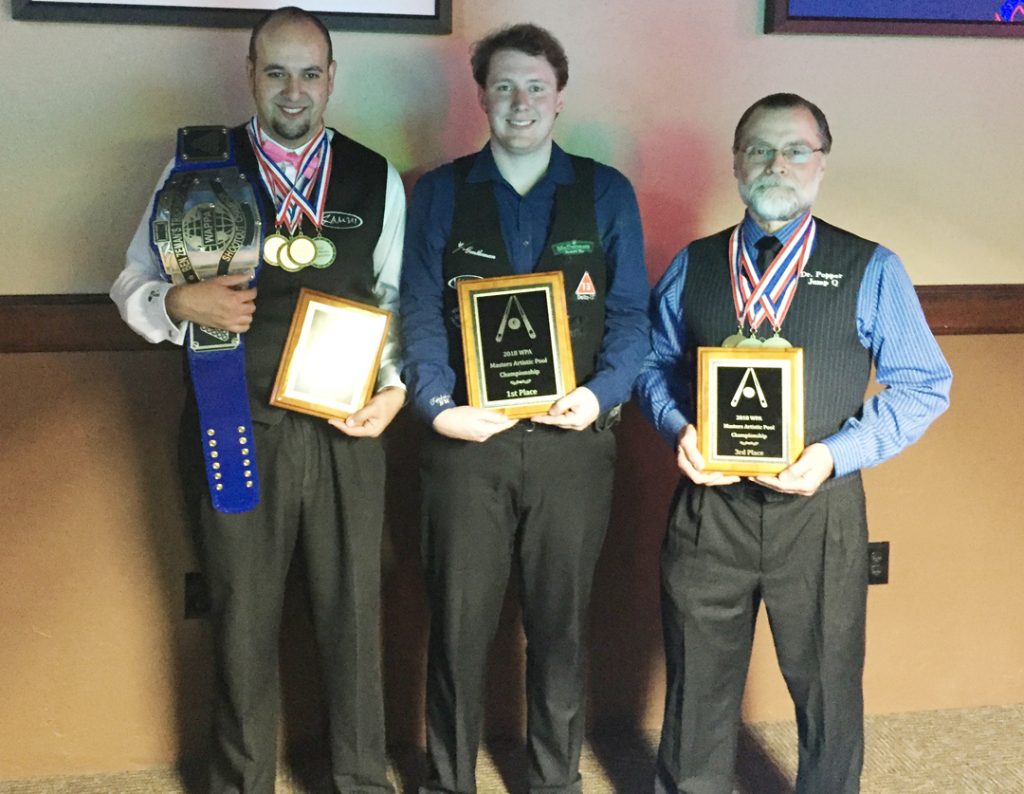 The WPA-APD held its fourth tournament in as many years, the 2018 Masters Artistic Pool Championship, at Jamaica Joes Billiard Bar and Grill in Midwest City, OK. The tournament lasted from June 14th through June 16th. The first day saw players shoot half of the disciplines in the preliminary rounds. Later that night the artistic pool players alongside other players in the room competed in the ever-popular speed pool tournament to benefit the 10 Strong Charity. This speed pool event had been won by Mark Dimick the last 3 years. This year Mark Dimick found himself in the finals against Jason Lynch. The match came down to the final game with Jason edging out Mark with a time of 1 minute even to run a rack of 15 balls.

The second day saw players finishing up the preliminary rounds to determine who would play in the playoffs with Abram Diaz edging out defending champion William DeYonker to take the number one seed. The second night also saw the second time the Ben Zeman Trickshot Shootout side event happen. The top three players played in a modified H.O.R.S.E. game on a pool table utilizing freestyle shots. The same three players from the first event competed again in an attempt to win the Ben Zeman Trickshot Shootout championship belt. Abram Diaz and Jason Lynch were looking to dethrone the inaugural winner in William DeYonker. After a number of rounds William was eliminated from the match, leaving Abram Diaz with a lead over Jason Lynch. Abram Diaz sealed the winning spot on a 2mm draw shot. An emotional Abram Diaz received the championship belt as the new champion.

The last day began with a quarterfinal match between Jason Lynch and Brian Pauley. Jason got out to an early lead that Brian could not come back from and Jason won 72-36. The semi finals saw rematches from both of last year’s matches with Mark Dimick facing William DeYonker and Jason Lynch facing Abram Diaz. The match up of Mark vs. William was close at the start but William pulled away to win 96-53. The second semi final was a barn burner of a match coming down to the final shot. Jason was trailing by 9 points and needed to make a 10-point shot on the 1st attempt to have a chance at winning the match. Jason picked the “3-2-1” shot out of special arts and made it on the first attempt and went ahead in the score by 1. Abram had not fared well with this shot in the preliminary round but on his second attempt made the shot to advance to the finals with a score of 102-94. Abram locked horns with William in the finals of the event hoping to feed off the close match he just won. The match was close at the start, but similar to the previous match William was in, he started to pull away. Abram fought hard to keep the match going but eventually was mathematically eliminated giving William a 104-74 win and his third masters title.

Along with an overall Artistic Pool winner, 8 discipline champions were crowned. Abram Diaz won the most discipline medals with three, winning Trick and Fancy, Draw, and Masse discipline titles. William DeYonker and Mark Dimick each won two discipline medals with William winning Special Arts and Bank/Kick with Mark winning Follow and Stroke. Jason Lynch won the Jump discipline. Newcomer Kaitlyn Bongiorno won the rising star award and the sportsmanship award that was voted on by her peers.

The WPA-APD would like to thank Jamaica Joes for hosting another great event as well as RackemJoe Live Stream for streaming the event. We would also like to thank McDermott Cues for sponsoring the stream as well as our 4 stream sponsors in Diamond Billiard Products, JB Cases, Cut Shot training balls, and the icue training cue ball. We look forward to the next time we can come to Joes for an event.

A complete recap of this event and other Masters events can be found at:

Note: Scroll down and click on “Masters” event listings under “Pro” events!

COPY AND PASTE LINK TO YOUR BROWSER IF NEEDED TO VIEW