HOT HOT HOT was the word of the day for our very first ever Signature Tour stop at Emerald Billiards in New Iberia, LA. And so was the action! Towards the final stages of the tourney with 16 players left, WPBA President Dean Roeseler announced so many hill-hill matches that he started asking the audience what they thought the score might be! And this was all within 10 minutes! 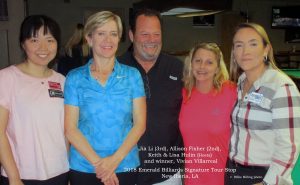 This stopâ€™s host venue was full of Southern hospitality with an arena of 8 9-foot gold crowns, Aramith balls and the ever popular measle cue ball. 63 players arrived from all over the country with their eyes on the total purse of $29,000.

PoolAction TVâ€™s Ray Hansen and longtime pro Mary Kenniston provided the streaming and commentary for our Signature event. We had a great deal of viewership during this free stream which PoolAction TV put through our WPBA Facebook page!

Sunday brought back the top 12 players and elimination rounds continued throughout the day with some spectacular nail-biting matches! Allison Fisher and Vivian Villarreal played the hot seat match with Vivian winning 7-6 in yet another hill-hill shootout sending the fans into overdrive!Â Â  Allison then played newcomer Jia Li to see who played for the championship and won 7-5 placing Jia Li 3rd with a strong finish for her first WPBA event. The finals were a true double elimination format with a race to 9, so Allison would need to double dip Vivian. Alas, in her true Tornado style form, Vivian was as scorching hot as the local weather, and took down Allison 9-3 with only 2 misses the entire set! This is Ms. Villarrealâ€™s second major tournament win in a row after taking the Ashton Twins Classic event down in Canada this month! Congratulation to all the players who attended this highly successful stop!

In addition, Sunday brought a TON of Junior players to the â€œback roomâ€ of this hall and many of the Proâ€™s made a point of working with them, signing cues, balls, t-shirts and offering encouragement. It was quite the inspiring sight to see a room full of young players and future champs and their parents!

Much appreciation goes out to all who helped make this first ever Signature Tour event a great one, from host venue Emerald Billiards and all our sponsors, to the volunteers who kept score, and the referee help! Letâ€™s do this AGAIN!!