CORR REBOUNDS FROM PAO DEFEAT TO WIN AT JPNEWT

Back in June, Karen Corr made her first appearance of the year on the J. Pechauer Northeast Womenâ€™s Tour (JPNEWT), and breezed through the event undefeated, while testing out a nagging back problem. Corrâ€™s second event wouldnâ€™t go nearly as easily. The Billiard Congress of America Hall of Famer needed a break-and-run in the deciding game, to fight back from the one-loss side and defeat Caroline Pao 9- 8, in the tourâ€™s fifth stop of the season â€“ held August 11 and 12, at Triple Nines Bar and Billiards, in Elkridge, Maryland. Corr was sent to the one-loss side by Pao, whowas competing in her first JPNEWT event of the year, and her first tournament over-all, in a couple of months.

â€œFirst of all, Iâ€™m really happy with the results, but Iâ€™m also really surprised,â€ Pao said. After a first-round bye, Pao posted a 7-3 victory against Nicole King, a 7-0shut-out of Leslie Furr, and got byÂ  Nicole Monaco 7-3, to face Corr for the first time in the hot-seat finals. Corr appeared to be in control in the early stages, using two break and runs, as well as an unforced error and a dry break from her opponent, to jump out to a 4-0 lead in the race-to-seven match. Knowing the capabilities of her opponent, Pao tried to focus on the table, while minimizing the pressure. â€œI said tomyself, â€˜no matter how ugly this gets, you have to get one point on the board,â€™â€ Pao said. â€œYou have to try your best.â€

Pao used a solid break to rally, breaking and running the fifth and seventh games. She also capitalized on a missed shot by Corr, and a combination shot on the 9- ball, to tie the match at four games each. Pao took the lead with another game- winning combination, then capitalized on a Corr miss in the 10 th game, and a misplayed safety in the 11 th game by her opponent, to complete the comeback â€“ winning seven straight, for a 7-4 victory.

After Corr disposed of Kia Sibury 7-2, on the one-loss side, Corr and Pao met again. Unlike the first match, it was Pao who had some early opportunities to jump out ahead, but was unable to capitalize. Leading 1-0, she missed a 3-ball in the corner pocket, which allowed Corr to tie the match. Pao also missed an 8-ball in the fifth game, and misplayed position on the 7-ball in the sixth game. She would bank in the object ball, but couldnâ€™t get back in line for a run-out, leaving the 9-ball in the corner pocketâ€™s jaws after a bank attempt. Corr easily pocketed the game-winner and took a 4-2 lead. â€œThat rack really stood out to me, because that was just an unforced error,â€ Pao said. â€œThat rack really put a stake in my heart.â€ Pao battled back and tied the match at four games each, but quickly found herself trailing again after a scratch in the ninth game, and a missed cut shot on the 9-ball in the next game. She continued to battle, winning a safety battle and taking advantage of a missed 5-ball by Corr in the 14 th game, to tie the match at seven games each.

However, Corr was able to break and run twice in the alternating break format, to nail down the victory. Despite the defeat, Pao was still rewarded at the eventâ€™s conclusion â€“ learning she had earned a spot in the North American Pool Tourâ€™s (NAPTâ€™s) Desert Classic next month at Griffâ€™s, in Las Vegas. â€œI had no idea. So thatâ€™s a bonus,â€ Pao said. â€œIâ€™m definitely going to try to go to that.â€ Baltimoreâ€™s Sidbury, also turned in a solid performance in the event, rallying from an early loss and finishing in third place. Sidbury opened competition with a 7-1 loss to Corr; then went on a run through the one-loss side of the bracket â€“ defeating Val Nolan, Sharon Oâ€™Hanlon, Bethany Sykes, Nicole King, Nicole Monaco, and Linda Shea, before falling to Corr again in the semifinals 7-2. â€œWith the pressure of being kicked to the one-loss side early, I knew I couldnâ€™t afford to lose another match,â€ Sidbury said. â€œThe pressure had me wired, so I had to remind myself to relax, while continually doing deep breathing exercises.â€

The JPNEWT tour is back in action, September 15-16, at the First Break CafÃ© in Sterling, VA. The tour is sponsored by the following: J.Pechauer Custom Cues; 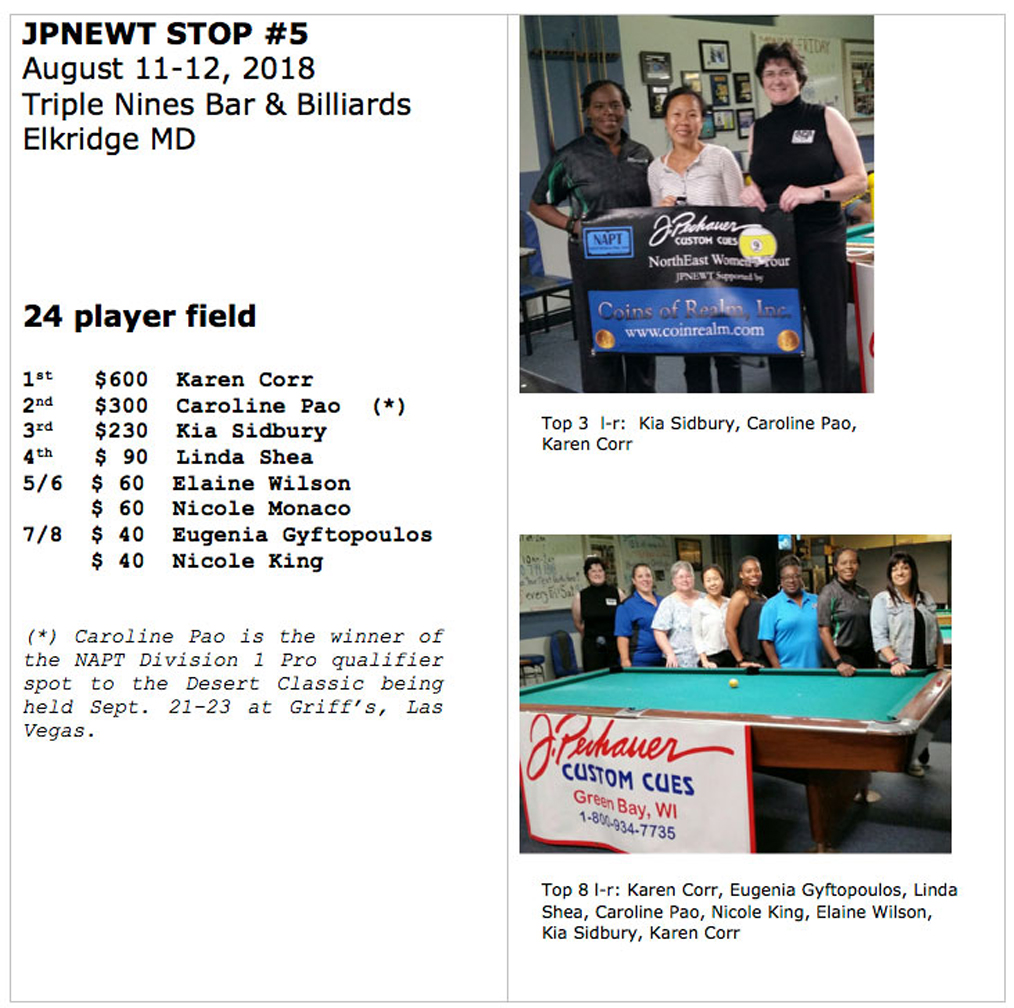