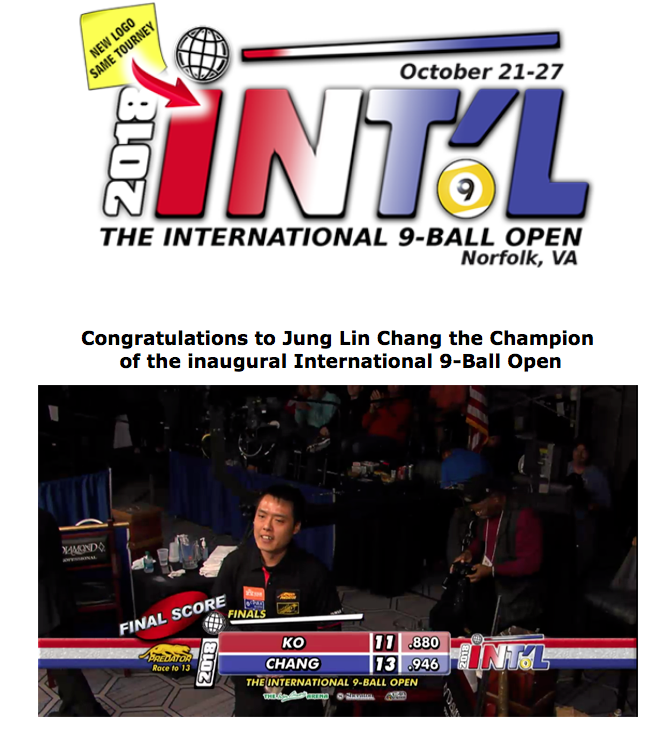 The finals was a race to thirteen games. Ko won the lag and made three balls on the break. Unfortunately, one of them was the cue ball. Chang handled the rack easily to take the first mark. 1-0. He broke and ran the next rack for 2-0 and then made an illegal break but Ko wanted nothing to do with the layout and gave the shooting rights back to Chang. Wise choice. Ko wound up with a nice spread of the balls that he took home to trail 2-1 in the match.

Ko won the safety exchange that developed in the next rack and finished to tie the match at two games apiece. He then broke and ran to take his first lead at 3-2.

An illegal break (three balls must pass the head string) brought Chang out of his chair. Soon we were tied at three. Chang returned the favor of an illegal break and Ko cleaned up to take the lead 4-3. Then the table broke ugly with all of the balls grouped around the foot string. Ko got the first opening and looked to be out but missed the eight ball, leaving Chang a long rail bank. He took it straight back and put the nine in the side to tie us at four games each.

Chang broke and ran the next one. 5-4. But Ko won the next two and then led 6-5. The lead did not last. Ko got out of line on the three ball in the next rack and Chang tied us up again at six apiece. Ko got to the table in the next rack but missed the two ball and scratched on the attempt. Nevertheless, he got another opportunity at the table and did not waste it as he ran out to a narrow 7-6 lead.

By now, it had gotten predictable. Sure enough, Chang took the next rack to tie us again, now at seven games. Chang then scratched on the break for the third time in two consecutive matches. Ko ran the rack out to lead by one, 8-7. Ko won the next as welt own his first two point lead of the match at 9-7.

Then Ko got VERY lucky twice. First he was shooting the three ball into the corner and miscued. The three went nowhere near the corner but had just enough roll on it to bank off of the end rail and fluke into the side pocket. Ko finished out the rack. Then he made the nine on the next snap and suddenly led the match eleven games to seven.

Chang won the next rack to get to eight. In the next rack Ko was at the table and got rubbed by a ball one his way to shape and scratched. You just canâ€™t give these guys ball in hand. Chang took us to 11-9. When he also won the next game he had narrowed the gap to 11-10.

Chang broke dry in rack 22 and Ko pushed out but Chang gave it back. Ko hit the one ball but went two rails and scratched in the side. Chang took that rack and the next and we were again tied, now at 11 games each. Ko scratched on the one ball in the next rack and Chang cleaned to sit on the hill at 11-10.

Chang broke the next rack but the balls layed tough. He had to bank his first shot and the seven ball was tricky. He pulled off a magic trick to get shape on that seven ball and three balls later he became the first International Open Champion and took home $40,000 for his efforts.