For the past four years the American 14.1 was been played at Diamond Billiards, Midlothian, VA where great progress was made through the increased prize fund and additional world class players.      Photo’s By Karl Kantrowitz, Village Camera and Video 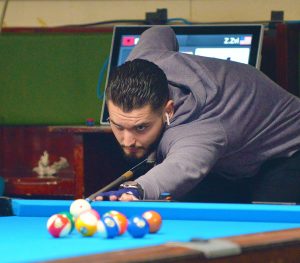 Players began arriving into NY on Monday where a reception was held for Thorsten Hohmann & Tony Robles at Manhattan’s classy Amsterdam Billiards. Round Robin action began at Carom Café on Tuesday with a 48 player field divided into eight flights each headed by a top player. The five remaining players in each flight were selected in the open blind draw at the players meeting. See attached. Players came from around the globe including current World No. #1 player Eklent Kaci from Lac, Albania who was the eventual winner. Also in the field was the greatest player over the past 40 years, Efren Reyes of the Philippines, along with top world 14.1 gurus Thorsten Hohmann, Mika Immonen, John Schmitt, Alex Pagulayan, Dennis Orcollo, Ralph Souquet and a host of top international players. In addition, many terrific lesser known young players showed their prodigious straight pool skills.

And some old timers as well. Early in the round robin, NY standout, 73 year old Tom Walter from Great Neck, stepped up after Efren’s opening safety break and ran 125 and out! Stoic Tom was not even aware that he had run 125 and began to rack the balls for the 10th time before iconic Efren got out of his seat to shake Tom’s hand! Always a legend. Two matches later Efren ran 125 and out against Queens very own Zion Zvi. The 15 Brunswick Gold Crowns played perfectly thanks to Simonis 860 blue cloth and brand new Aramith Tournament Pro balls and allowed only five 125 ball runs in the 120 games during the round robin; others were Dennis Orcollo and 2x by Thorsten Hohmann. The 24 players who advanced, the top three in each of the 8 flights based on W/L, were pretty much those that were expected. Typically players who advance have won three of their five matches but if two players tie then their head to head match determines who moves on. Should three or more players tie advancing is determined by the best ball deferential, balls made in five matches & balls made against.

The Annual AMERICAN 14.1 STRAIGHT POOL CHAMPIONSHIP has become an integral part of the October pool scene and this year’s new venue, Carom Café in Flushing, NY, long known as the home court of USA Three Cushion Billiards, has now taken its place as one of the nation’s premier rooms for pool and in particular 14.1. Supported by a superb live stream table and HIGHROCK state-of-the-art video equipment and top notch pros doing colorful commentary the tournament flowed smoothly and without incident. If you watched in person or viewed any of the live streaming you could not miss the new Cuesco electronic scoring screens at every single table. Cuesco sent staff all the way from Seoul, Korea to assist with implementation of this new touch screen electronic scoring equipment. With only very minor bugs, as any new system would have, the players universally raved about the ease and clarity of the scoring. 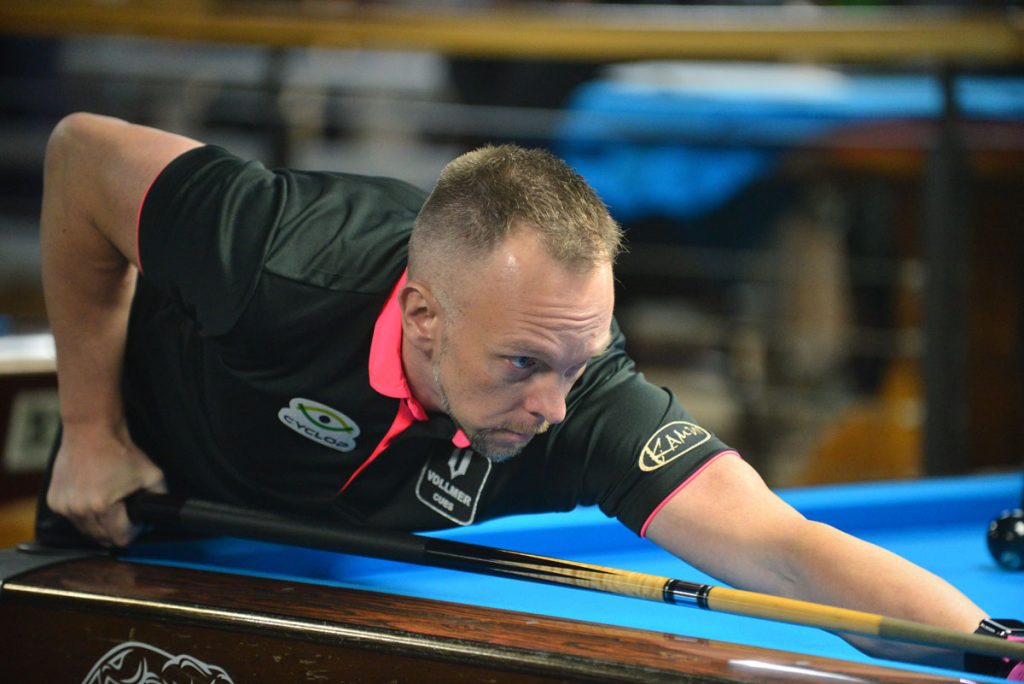 Peter Burrows welcomes the opportunity for players to voice their opinions of format, rules and anything else on their mind. Peter seeks feedback to make this a “player friendly” tournament. Some of these elements are a polished dress code, player integrity with all ball fouls, and no time clock, always a debate. Peter notes. . .

“We honestly believe that players do play at their own pace, and generally that is a constant one. There will always be discrepancies and fluctuations, but a given player in my experience usually plays the way they play. I have watched top 14.1 players for more than six decades since first seeing Mosconi & Crane play at the old Bensingers room on Randolph Street in Chicago in the late 1940s. Pool players play at the pace they play at and the rhythm and tempo of one player’s game is what it is. I just don’t believe in a shot clock in Straight Pool. The game at this world class level is cerebral and players need time to think and analyze and I want to recognize that. Some situations lend themselves to more rapid disposal of a rack, but others do not. It you want a time clock play chess.”

“There will always be a match here and there that is drawn out, and this year was no exception, with a few matches on the tight Diamond tables taking an unusual 2+ hours. But this is an exception and will happen in this most imaginative of games. Everyone is not a John Schmidt, Luc Salvas or Machine Gun Lou Butera!”

Tournament Director, Peter Burrows, believes that most 14.1 players understand this. No time clock.

Peter goes on to note that playing under the classic “all ball fouls” requires a greater emphasis on player integrity which has been so widely adopted with great success in golf . . .

“Why do we need a white glove referee at every table?   Nice, classic of course, but simply not practical. Golf rules are many times more complex than pool but the Royal & Ancient rules are well known and players honestly adhere to them. Pool can do the same. And while we’re at it, let’s dress the part. So the American 14.1 Straight Pool Championship is a dress code tournament following the format of other world class events. The dressier the better, what’s wrong with that? Pool guys . . . and ladies . . . are handsome folks . . . let’s look the part! Dress up our game. My gosh, we’ve got the Black Widow, Ms. Jeanette Lee the most stunning gal on the planet plus just a terrific player and advocate for our sport . . . and impeccably attired many time World Champion Thorsten Hohmann, although not playing this year, Jeanette & Toasty have been a regulars in our past tournaments, beating all of us like a drum, let’s follow their lead and look sharp!”

This is especially true given today’s live streaming of pool matches. All four days were covered extensively thanks to Highrock and their free live stream. Many of the top players and some locals provided insightful commentary thanks to Gene Mann, Michael Yednak, Jerry McWorter, Shaun Wilkie, Danny Barouty, Michael & Darren Frank and others who sat in the live-stream booth for a spell.

Peter Burrows believes the old-fashioned RR straight pool format is not only fairest to players, allowing them to play a maximum number of matches, but is also ideal for spectators. They can watch their favorite locals and top pros all day long with no fear that they will get quickly eliminated in a one and done tournament. From the players perspective they can get warmed up, become familiar with the equipment and there is no tedious Loser’s Side delay which occurs in drawn out double elimination tournaments. Non-stop action involving everyone from dawn to dusk is a key positive in the round robin format

The Round Robin generally went according to odds with most top pros advancing as seen in the charts along with some terrific young players. Especially impressive was Finnish youngster Casper Matikainen who streaked through the RR 4-1 and put up a 120 ball run to defeat Ralf Souquet in the 1st rd. of elimination where matches were to 150.

In the round of 16 Mika Immonen, flight winner got a bye and then played Mr. 400 in a tight match to 150. Needing only four balls Mika scratched on his final breakshot; unfortunately John needed only 7 and quickly got out ending Mika’s tournament. On a nearby table Ralph Eckert opened with a run of 105 on Dennis Orcollo, who then put up 23 before Ralph got back to the table to add 17.  Dennis ran out! Two century runs. Ralph averaged 60 balls an inning and lost! Straight pool, the greatest game, can be painful. 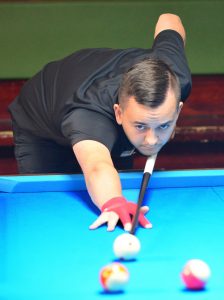 2017 winner, Konrad J. continued to impress going 4-1 in the RR and becoming the 4th seed before finally losing to Thorsten in the semi-finals following a crazy late match scratch.  Konrad brought along with him 3 other very strong 14.1 players from Poland. Miezko Fortunski lost a heartbreaker to his countryman, Konrad, in the round of eight. 19 year old Marek Kudlik played beautifully, using nerves of steel to defeat legend Efren Reyes in the same round before a partisan crowd. . . 3 polish loyalists rooting for him, everyone else for Efren! Unphased Marek moved on to knock off Schmidt 150-5!! Just ask John how the young phenom plays. Poland’s Rad Babica came with the youngsters making his 3rd visit. A strong contingent for sure. Equally strong where three great young players from Moscow, Ruslan Chinahov, Max Dudanets & Fedor Gorst, all who advanced to the elimination round and played great. 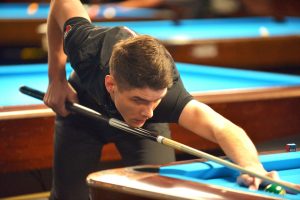 Gracious Warren Kiamco, stuck in a very tough bracket, was the top player not to advance. Strong players who finished 3-2 but did not advance due to losing head to head matches were Bob Hunter, Shawn Wilkie and Mike Davis. RR Bracket winners were the eight top seeds for the Single elimination each received a 1st round bye on Thurs.as reward for their top finish. 9-24th players were seeded playing one another in the opening elimination round, 9 vs. 24, 10 vs. 23, etc. 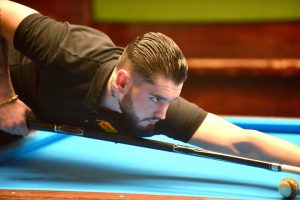 Congratulations to our winner, 2018 American 14.1 Straight Pool Champion, currently ranked the No. #1 player in the world, Eklent Kaci who defeated all time great and always gracious and humble many time Champion, Thorsten Hohmann. Their final match to 200 began Friday evening at seven and was nip & tuck for three hours. Exciting for sure. Key scratches along the way by both players with virtually no balls being simply missed. Thorsten, had two runs of 125 and the tournament HR of 144, but his late unfortunate scratch lead to his only loss over four days opened the door for Eklent who ran 80 plus out to take the title.

Just so many terrific matches by many of the world’s greatest modern day 14.1 players. All who watched would surely agree. Congratulations and a tip of the old fedora to everyone who helped make this year’s 14th annual American 14.1 Straight Pool Championship a huge success. We wish to again thank our many dedicated sponsors, including Ivan Lee and Simonis Cloth and Aramith Balls, Predator Group & Karim Belhaj. Dennis Walsh & Derby City 14.1. Bob Jewett, San Jose, CA, Nate Sulinski; Peter & Sandy Sears, Madison, WI, and Andy Lincoln, Michael & Darren Frank and our entire tournament committee and all of our many generous sponsors. Our deep thanks and appreciation to gracious Carom Café room owner Michael Kang, and his entire staff, especially Ira Lee, Eric Kwon & Charles Brown. Plaudits also to HighRock and Cuesco.   What a beautiful job they did. Superlative in every way! Thank you! Finally we must give thanks to the dozens of top pros for their continued patronage of our tournament for without them we would not have a chance to witness their magnificent skills in this beautiful and historic game of 14.1. Their time and schedules are valued and each one made a yeoman effort to come to NYC and play. God willing we hope to see everyone back again next year, October 2019.