HOUSTON, TX, November 1 â€“ This year’s Space City Open VII (“SCO”) has been moved to Big Tyme Billiards, and will be held on its regularly scheduled days, December 6th-9th, 2018. Big Tyme Billiards is located at 100 Cypresswood Dr., Spring, Texas 77388, right off I-45 @ Cypresswood Drive, only a few miles from the former venue.

The Space City Open is pleased to announce a new partnership with a pool room, whose unrivaled vision in the billiards industry has put them on the map. Space City Open’s “big” move to Big Tyme Billiards comes on the heels of promoters John Newsome, and WPBA Pro, Kim Newsome, and their desire to hold the Space City Open in a more “player friendly” environment, with owners who understand the industry, and what it takes to succeed. Big Tyme Billiards YouTube Big Tyme’s General Manager and accomplished pool player, Billy Sharp, had this to say. â€œWe believe this change of venue is a positive move for the event, and more importantly, the players. We look forward to hosting our first Space City Open!â€ Kim Newsome couldnâ€™t be more pleased with the direction of the Space City Open, now in its seventh year, and headed to its new host location in just five, short weeks. â€œThe Space City Open has long needed a host venue that focused on the growth of pool in Texas. Now, with the inclusion of Big Tyme Billiards, our vision has become a reality. I donâ€™t know of anyone Iâ€™d rather work alongside, than those I grew up with, in the Houston pool community. This is going to be funâ€, says Newsome.

The amenities at Big Tyme Billiards are never-ending. Their twenty-four, Diamond bar tables with tournament blue, Simonis cloth, will more than accommodate the SCO 9-ball division, and the tables will be open for the event. The one pocket and 9-ball banks divisions will still boast 32-player fields, and will be played on 9′ tables, but in a single elimination format. In order to offset this change, races in these two divisions will be lengthened to races to four on the winners’ side, and races to four on the one-loss side. The ladies 9-ball division will also be played on open, Diamond bar tables.Â All tables at Big Tyme Billiards, including six, 4 Â½ x 9 professional tables, are covered in Simonis cloth, and players will also enjoy using Accu-Racks by Outsville Billiards, and Cyclop Pool Balls. The only new rules implemented for the event, state that the 9-ball will be racked on the spot, and players must break from the “box”. All other rules, including winner breaks, and rack your own, will remain the same.

New this year, a $1,500 “All-Around” bonus will be awarded to the player accumulating the most points for finishes in the open 9-ball, one-pocket, and banks divisions. The brand new, seventeen-and-under Juniors 9-ball division, will kick off on Sunday, played on open, Diamond bar tables.

The Space City Open was created in 2012, by WPBA Touring Professional, Kim Newsome. Since its inception, the event has been highly successful, garnering well over one hundred players from across the U.S., to compete in the 4-day billiard event. This pool tournament is held annually, in Texas, the first week in December, and is the only one of its kind. The Space City Open is one of the biggest, annual pool events in Texas, boasting Open 9-Ball, Open 9-Ball Banks, Open One Pocket, Open Ladies 9-Ball, and a Juniors 9-Ball division.

If you would like more information about this event, please contact Space City Open Tournament Promoter and Director, Kim Newsome, at lonestartour@gmail.com. 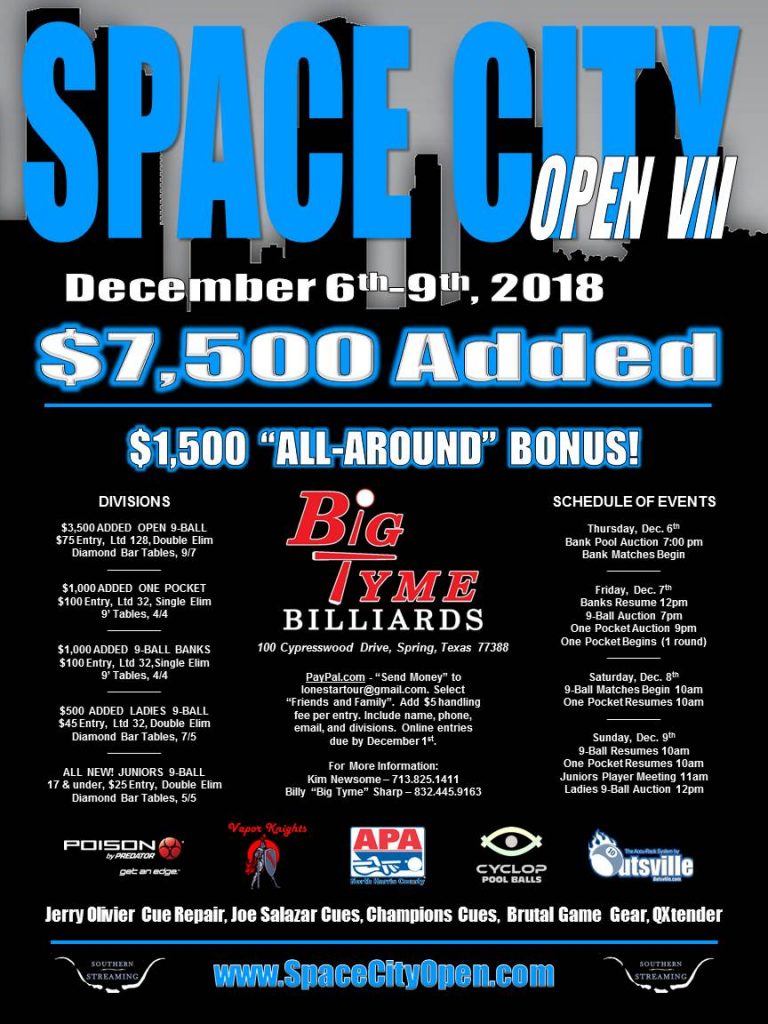