LAKE SAINT LOUIS, MO (Nov. 27, 2018) â€” The U.S. Amateur Championship is all about legacy, leaving your mark in a tournament contested by some of the best amateur players to ever pick up a cue stick – names like Parks, Brodt, Chen and Jones.

Pool tournaments come and go, but securing the title of U.S. Amateur Champion is something you carry with you forever, literally.Â  Not only does it stand out on an amateur billiard resume, but your name is forever added to the Trophy of Champions for generations to come.

Legacy is what drove more than 2,100 of North Americaâ€™s top amateur players to try and qualify for the 25th Annual event.Â  Thatâ€™s what brought 128 men and 41 women to Strokerâ€™s in Palm Harbor, Fla., in early November to compete in this yearâ€™s U.S. Amateur Championship.

Of course there were some great perks too.Â  Like a getaway to the Tampa area, one of the premier vacation destinations in the world, at a time when most of the country is experiencing their first taste of winter.Â  An all-expenses paid trip to a pro event next year courtesy of the APA for the winners of each division.

And letâ€™s not forget the championship trophy – a combination of marble and bronze that more closely resembles a piece of art than something won in a pool tournament. 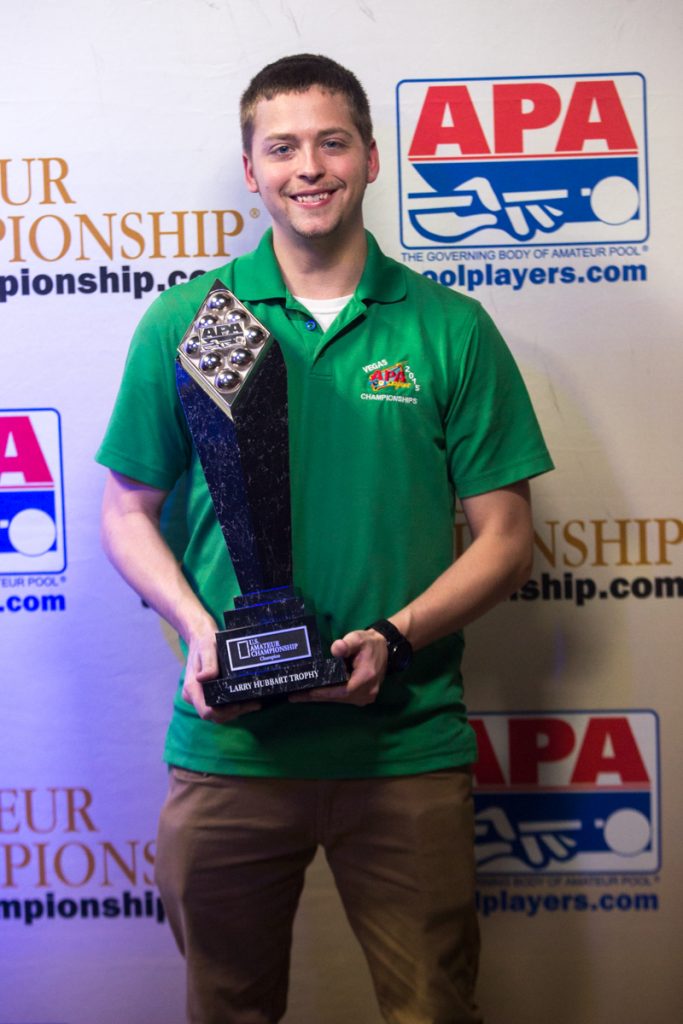 He defeated fellow â€œyoung gunâ€ Mike Leigh of Barrie, Ontario in the final round 11-3, after handing Leigh his first loss of the tournament just two rounds prior.

In the championship match, Schaad opened up an 8-0 lead in the 8-Ball set before Leigh finally got on board in the first game of the 9-Ball set.Â  By then though, the outcome seemed but a mere formality. Schaad ultimately closed out one of the most dominating finals performances in U.S. Amateur Championship history with a 9-on-the-snap to cap the victory.

Schaad will move on to compete in a 2019 Pro Event courtesy of APA, and, more importantly, his name will be added to the Larry Hubbart Trophy, forever cementing his legacy as a U.S. Amateur Champion.

Leigh finishes as the Runner-up, his highest finish in the U.S. Amateur Championship. 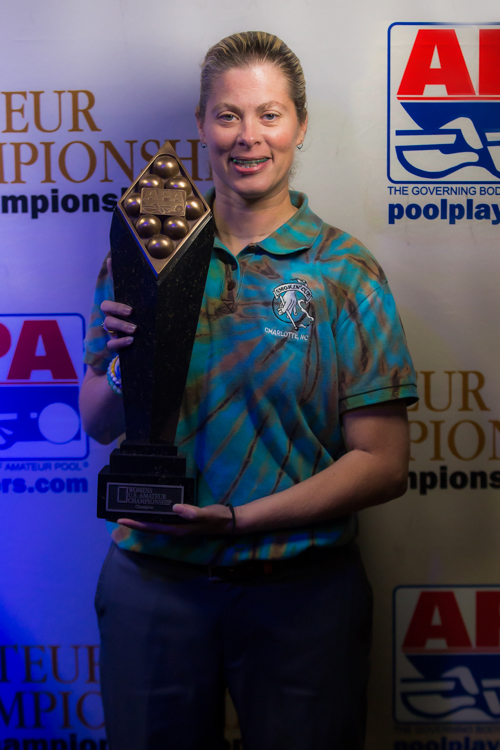 Thatâ€™s how the story ends.Â  But, how it unfolded is a tale that will go down as one of the most epic showdowns in U.S. Amateur Championship history.

The opening act begins late on the final day of competition in the hot-seat match, with both players undefeated and the winner heading to the championship match, while the loser would have to square-off in a play-in semifinal.

Huang, the defending champion, and savvy veteran of many U.S. Amateur Championship matches, outlasted Cossette 5-4 in a hill-hill battle that would serve as the opening act for what was to come.

Cossette then battled her way back by ousting Tina Hess in the semifinal round, setting up a rematch between herself and Huang.

In the finale, Huang jumped out to a quick 3-0 lead in the extended race-to-9.Â  Cossette then found her stroke and took the next four games and a 4-3 lead.Â  That lead was short-lived as Huang quickly won the next three games, regaining the lead 6-4.Â  Then it was once again Cossetteâ€™s turn to go on a run, winning the next four games to go on-the-hill.Â  Like a true champion, Huang wasnâ€™t going down without a fight.Â  She took the next two games, to force one final game, where the winner would take all.

In the final game, Huang was at the table with no clear shot on the 4-ball which was blocked by the 9-ball and the 5-ball.Â  Rather than give her opponent ball-in-hand, Huang attempted an aggressive shot that would have been remarkable if she could execute it.Â  Unfortunately, however, she fouled.Â  With ball-in-hand, and the 4-ball no longer tied up, Cossette ran out the table for the victory.

Huang finished as the Runner-up while Tina Hess of Huntsville, Ala., finished in 3rd Place.

The entry window for the 2019 U.S. Amateur Championship is now open with the Preliminary Rounds scheduled across North America in mid-September.

The U.S. Amateur Championship is conducted by the APA, and is the only tournament produced by the APA open to both members and non-members.Â  Preliminary qualifying rounds were held throughout the country in mid-September.

As Champions, both Schaad and Cossette will return next year to defend their coveted titles.

The U.S. Amateur Championship is a double elimination tournament that offers the nationâ€™s top amateur players the opportunity to showcase their skills through a combination of 8-Ball and 9-Ball matches, in the only APA event that does not use The EqualizerÂ® handicap system.