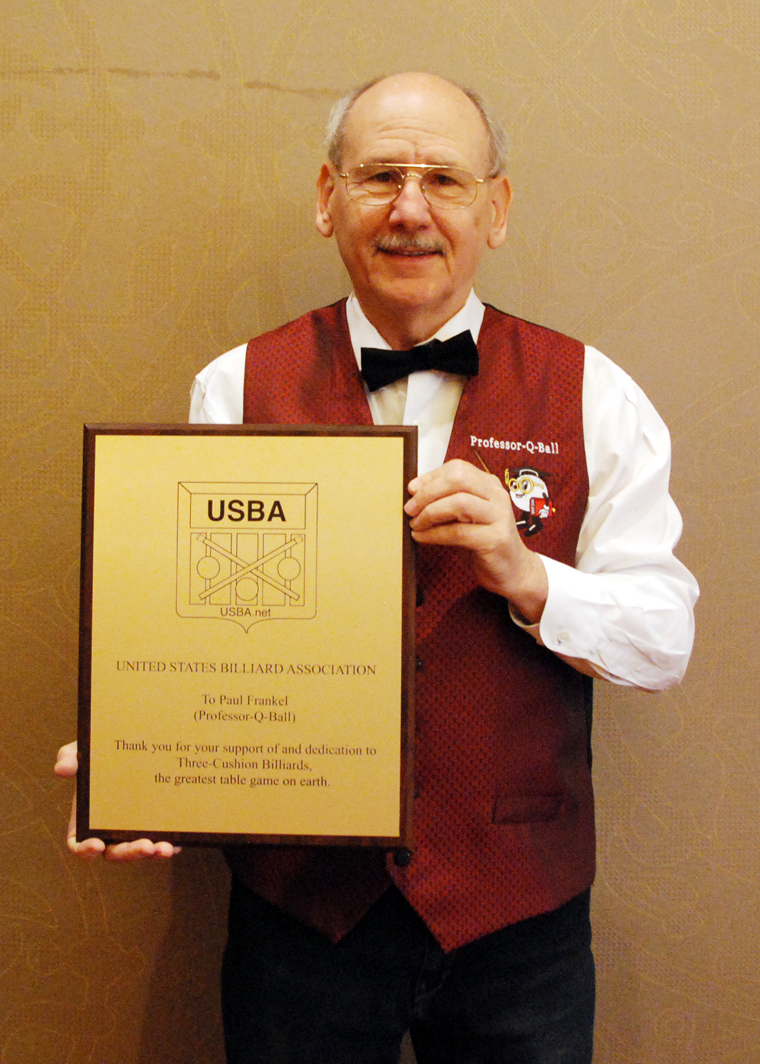 At the USBA Three-Cushion National Championship tournament held at the Casino del Sol Resort in Tucson, Arizona, the United States Billiard Association honored Paul Frankel, better known to the billiards world as Professor-Q-Ball, for his contribution to three-cushion billiards. More than anyone during the last fifteen years, Paul has been responsible for the resurgence of three-cushion billiards in America.

Mazin Shooni, the USBA President, presented Paul with a hand-engraved plaque in a surprise ceremony during the annual USBA banquet. The inscription on the plaque read: “To Paul Frankel (Professor-Q-Ball), Thank you for your support of and dedication to Three-Cushion Billiards, the greatest table game on earth.” The players and their guests at the banquet greeted Paul with a thunderous round of applause, showing their appreciation for his efforts.

Originally from New York, but now living in Tennessee, Paul has been instrumental in the promotion of the carom game during the last two decades. In addition to being the publisher of Professor-Q-Ball’s National Pool & 3-Cushion News in both print and digital form ((https://professorqball.com), Paul has also organized various billiard tournaments, exhibitions and events, including the Champion of Champions tournaments and several USBA Qualifiers. He is a constant presence at the Super Billiard Expo and other billiard tradeshows, hawking his paper and introducing pool players to the pocket-less game. As a representative of Gabriels tables, Paul has sold dozens of tables to individuals and room owners throughout the United States.

We thank you Paul and hope you keep the ball rolling!