(Doha, Qatar)–After the raucous excitement of the Mosconi Cup last week in London, the pool world is now braced for a completely different kind of intense and nervy action, as the 2018 WPA World 9-ball Championship gets underway Friday at the Al Arabi Sports Club in Doha, Qatar.

If past years are any measure, there wonâ€™t be huge crowds in Doha. But, still, fans will be treated to an incredibly explosive field of the worldâ€™s very best pool players doing battle to see who will be crowned king of the 9-ball universe.

This will be the 9th straight year that the tiny Gulf country, through the government sanctioned Qatar Billiards and Snooker Federation(QBSF),Â  has put its full backing behind the sport of poolâ€™s most important event.

As is standard, the tournament will be run in two brutally difficult parts. The group stages will run from Dec. 14-17. The players will be broken up into 16 groups of 8 playing a race-to-9, alternate break, double elimination format.Â  Four players from each group will make up the final 64, which marks the start of the always tense and dramatic single elimination phase of the tournament.Â  Matches will then become race to 11, alternate break. The final, which takes place on December 20, will be a race to 13. 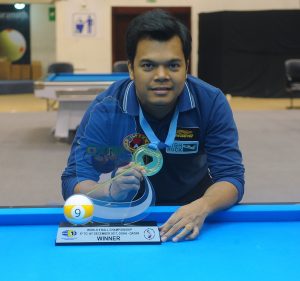 The defending champion is the Philippines’ Carlo Biado, who became the first Filipino since Francisco Bustamante in 2010, and the fourth Filipino ever, to win the World 9-ball Championship. Biado won his first world title with a convincing win over fellow Filipino Roland Garcia in the final.

Only eight Filipinos make up a somewhat smallish contingent this year but we can rightfully expect one or more to go far in the event. Besides Biado, Pinoy cue fans should look out for Garcia. Just a few days ago the Pampanga native stormed through a stacked field of great Pinoy cueists to win the Manny Pacquiao Open in General Santos, Philippines. With a second place finish last year, and a hot hand this year, Garcia certainly looks like he has the goods to go all the way.

It seems most fans have their eye on the USAâ€™s Shane Van Boening, and for very good reason. After Van Boening pocketed the winning 9-ball in last weekâ€™s Mosconi Cup in London, he has admitted that he has arrived in Doha literally brimming with confidence, and is playing under absolutely no pressure. And donâ€™t forget, while Van Boening skipped last yearâ€™s event, in both 2015 and 2016 he lost in the finals. Itâ€™s no wonder that odds makers have made the American star their betting favorite.

Another almost surety for the final four will be one or more Taiwanese players, which sees 12 of its always prepared world class players in the field of 128. Look no further than red hot world number 2 Chang Jung Lin as a solid pick to take the crown. 2015 World 9-ball Champion and world number 5 Ko Pin Yi is always a threat. World number 7 Wu Kun Lin could surely make noise.

China has yet to win a world 9-ball title but they usually put in a solid performance in Doha. Wu Qia Jing(who won the 2015 title playing under Chinese-Taipei) is in the field. Dang Jinhu and Liu Haitao also stand out among the six Chinese players. Liu in particular will be looking to make amends from last year, when he fell overslept in his hotel room before his quarterfinal match and showed up to the arena 25 minutes late for his match, and suffered a humiliating disqualification to eventual winner Biado.

Surprisingly there is only one British player in this yearâ€™s field. Chris Melling, though, will gladly carry the weight of his country on his shoulders. The always exciting Melling has had a busy and fruitful year and feels he should be considered a top ten favorite to pull off a victory this week.

Over in mainland Europe, 2016 World 9-ball Champion Albin Ouschan of Austria is coming off a sensational week at the Mosconi Cup in London, and is sky high with confidence. World number one Klenti Kaci from Albania expects to improve on his semi-final finish last year.Â  Kaci is just 19 years old but he isnâ€™t the only youngster from Europe that is looking to make their mark. 21 year old German sensation Joshua Filler is likely to go far. 18 year old Russian Fedor Gorst and 17 year old Pole Wiktor ZieliÅ„ski could surely see themselves cause trouble. Poland, which has one of the worldâ€™s most thriving pool scenes, brings 8 quality players to this yearâ€™s big dance.

*The 2018 WPA World 9-ball Championship takes place at the Al Arabi Sports Club Sports Club in Doha, Qatar from December 10-20, 2018. The event is hosted by The Qatar Billiard and Snooker Federation(QBSF), and is sanctioned by the The World Pool Billiard Association, the governing body of the sport of pool. 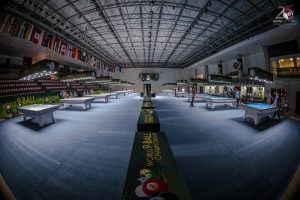