For the second time in three days, Mieszko Fortunski watched as the lead slipped from his grasp at the Predator Grand Final. 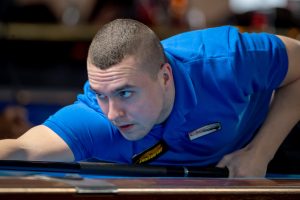 The young Pole jumped out to an early lead against Chris Melling but let the Englishman back into the game with a handful of unforced errors, as Melling gutted out a victory against Fortunski in a sudden death shootout in the quarterfinals Saturday night at Astoria’s Steinway Billiards. Fortunski, who reached the quarterfinals with a sudden death victory against Dennis Orcullo, was dealt a similar fate Thursday night against Jayson Shaw when he stood at the table leading 9-8 in a race-to-11 and proceeded to scratch, allowing Shaw to tie the match and win, 11-9.

Using a powerful break, Fortunski gained an early 5-2 advantage then used some superb shot-making as well as a victorious safety exchange in the 14th game to extend the lead to 9-5. Melling cut the lead to 9-7 after Fortunski fouled in the 15th game on one of his signature trick shots on the 1 ball in the 16th game. After Fortunski increased his lead to 10-7, Melling gutted out four straight racks – capped off with a run out in the 21st game that started with a one-rail kick in on the 2 ball. 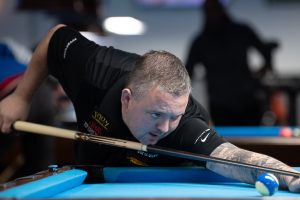 The stocky Brit appeared to be in command of the match but squandered the 22nd game when he left the 7 ball in the corner pocket’s jaws. Fortunski tied the match at 11 but found himself trailing again when he failed to pocket a ball on the break in the 23rd game. Fortunski wasn’t finished yet sinking a clutch table-length diagonal cut shut on the 1 ball after a Melling pushout which led to a match-tying run out that forced overtime.

With the standing room crowd at Steinway buzzing, both players made their penalty shots in the first frame, missed the pocket in the second frame and traded pocketed shots in the third and fourth innings. Both players missed their designated shots in the fifth frame and Fortunski again missed in the subsequent frame. Stepping to the table knowing that one more made ball would end the match, Melling positioned himself over the shot, gave it a quick look, and sent the 10 ball into the bottom of the corner pocket.

Melling now moves on to the semifinals to face Joshua Filler, who defeated Ruslan Chinahov 13-8 in the other late quarterfinal. This match is scheduled to begin at 2 PM Eastern time.

During the early evening matches, Germany’s Ralf Souquet removed the World Pool Series monkey from his back, forging ahead of American Mike Dechaine then holding on for a 13-9 victory. 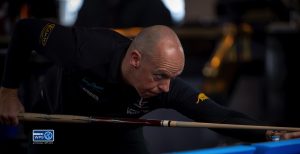 In the two years that the World Pool Series has been in existence, Souquet has performed strongly in the event but has never been able to reach the final four.
Two years ago, the German finished fifth at the Aramith 8-Ball Masters and last year Souquet made a late charge in his quarterfinal match against Dennis Orcullo but was unable to pull off the comeback, falling to the Filipino, 13-9, and again finishing fifth.

Saturday afternoon, the man they call “The Kaiser” was able to flip last year’s script, building a comfortable lead and holding off his opponent’s late rally to advance to the semifinals, 13-9. The victory avenges an 11-6 loss that Souquet suffered at the hands of Dechaine in the first round of the winner’s bracket Thursday.

After Dechaine used two breaks-and-runs and a Souquet miss to grab an early 3-0 lead, the German responded with two runs outs, a safety victory, and a dry break by his opponent to win five straight games. After Dechaine cut the lead to 5-4 Souquet won five of the next six games to take a commanding 10-5 lead in the race-to-13.

Souquet slowly started losing momentum as victory appeared imminent, as Dechaine using a well-placed safety and a break-and-run to cut the lead to 11-7. The German was positioned to climb onto the hill after the American failed to pocket a ball on the break, but left the 8-ball sitting in the corner pocket’s jaws. Dechaine cleared the table then took advantage of a missed 1 ball by his opponent to cut the lead to 11-9.

When Souquet scratched during a safety attempt on the 6 ball in the 21st game, it appeared the lead would shrink even more, but Dechaine missed a makeable 10 ball in the side pocket. The Billiards Congress of America Hall of Famer pocketed the ball to increase his lead back to three games then used a final unforced error by Dechaine on the 1 ball to close out the match.

Dechaine, who finished tied for fifth, was impressive throughout the weekend, starting with an 11-2 drubbing of Mohammad Ali Berjaoui in the opening round then defeating Souquet in his next match. After Dechaine was bounced over to the one-loss side after an 11-9 defeat at the hands of Orcullo, the reigning Super Billiards Expo champion bounced back with an 11-2 victory over Gary O’Callaghan and a 13-5 defeat of Mika Immonen before falling to Souquet in the quarterfinals.

Souquet will face Filipino James Aranas of the Philippines in the morning semifinal which is scheduled for 11 AM Eastern time. The Filipino advanced to the semifinals with a 13-11 victory over Albania’s Klenti Kaci.

This last event of the 2018 World Pool Series, The Predator Grand Final, is being held at Steinway Billiards in Astoria, Queens, New York City from January 17-20, 2019. The World Pool Series is sponsored by Predator, Poison, Aramith, Rasson, Iwan Simonis, Tiger, and Kamui. Our suppliers and partners are Billiards Digest, CueScore, Let’s Go Print, Outsville, UpState Al, and the WPA