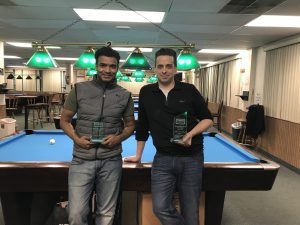 Shooterâ€™s Family Billiards in Wayne New Jersey drew 31 players Sunday April 7th to play 10 ball in what has become on one of the tours biggest draws since adding it along with 8 ball to the Tourâ€™s schedule of events.

Pascal Dufresne would end the day undefeated however earning his first trophy of the season. He would start his day with victories over Jerry Almodovar 6-5, Paul Wilkins 6-4 and would then meet and send Shivam Gupta to the one loss side 6-3. He would then shot out Kevin Scalzitti 6-0 and meet Rick Rodriquez in the hot seat match. Rick, a house player, would be racking up one of his highest finishes to date moving thru the lower bracket with realities ease. H
Rick would start his day facing Mac Jankov 5-2. He would then play Brian Schell 5-4 and the tour regular Bob Toomey would fall 5-1 to Rickâ€™s determination for his first trophy. Clint Pires would be next to fall moving to the one loss side 5-1. Pascal would then send Rick to the one loss side 6-2 in the hot seat match and what would be Pascalâ€™s last match of the day.
Rick would wait in the semiâ€™s for Shivam Gupta who after his loss to Pascal would start his 4 game winning streak with victories over Tri Chau 6-2, his road partner and tour regular Jaydev Zaveri 6-3,Kevin Scalzitti 6-5 and the Bob Toomey who he would send home in 4th place 6-2.Â  Shivam would then meet in what would be the last match of the day with Rick Rodriquez which would go hill-hill but a break and run with clinical precision would end Rick Rodriquezâ€™s hope for a trophy but still one of his highest finishes to date 6-5. Pascal and Shivam would decide to end the day there with Pascalâ€™s retaining the first place trophy and bragging rights.