Hosts Great Britain battled from 4-1 down to beat Poland 7-5 and secure their place in the quarter-finals of the BetVictor World Cup of Pool at the Morningside Arena in Leicester, England. 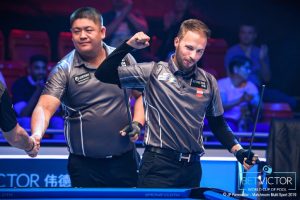 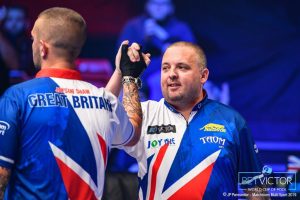 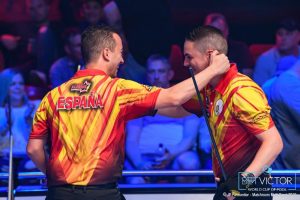 There were Friday evening wins too for Spain over Finland, and Austria, who defeated Hong Kong, China with both matches also ending 7-5 and the last eight is now set as the tournament moves into its closing stages on Saturday and Sunday, live on Sky Sports, DAZN and networks worldwide.

With Great Britainâ€™s Chris Melling and Jayson Shaw having the home crowd on their side, it was Poland (Konrad Juszczyszyn and Mateusz Sniegocki) who took the first rack, ran the second and then benefited when Great Britain again couldnâ€™t take advantage of having the break in the third.

The hosts got on the board after Shaw executed a good safety from a push out, and Poland then left the 1 on. But Britain again couldnâ€™t take advantage of having the break, this time Melling missing a 6 when they looked to be heading to 3-2, and instead Poland made it 4-1

After their faltering start, Great Britain battled back to level the match and then led for the first time at 5-4. They moved to the hill soon after, but Poland werenâ€™t done yet and pulled a rack back before Shaw and Melling closed out the match to complete the quarter-final line-up.

â€œThey played really well at the start but we didnâ€™t really come out firing,â€ said Shaw. â€œWe played a couple of silly shots, letting them get in front but we told each other we would get a chance and when we did we took it to go in front.â€

Melling added: â€œI struggled there; early on I was struggling with confidence. Luckily for me I have one of the best players in the world on my team. If we can win playing like that who knows what can happen when we play well.â€

The session opener saw Mario He and Albin Ouschan in ruthless form for Austria. Finalists last year and winners in 2018, they ran to a commanding 6-1 lead, capitalising on some sloppy pool by Hong Kong, China.

Knowing they couldnâ€™t afford another mistake, and would probably need some luck along the way as well, Lo Ho Sum and Yip Kin Ling took out the next rack and when Austria broke dry in the next, a 5/9 combo presented itself and Sum took advantage. They took the next rack on their own break and had another chance almost immediately as Austria broke dry. From 6-1 down Hong Kong, China had pulled to within one.

But at that stage Austria regained control of the table, and eventually got their seventh match on the board to progress to a quarter-final clash with Greece.

The last of the quarter-finals will see Spain face Great Britain, after David Alcaide and Francisco Sanchez-Ruiz won a match in which momentumâ€™s pendulum swung first to Spain, then to Finland and finally back to Spain.

The Spanish pair established a 4-1 lead over Petri Makkonen and Mika Immonen, only for the 2012 champions to fight back and go 5-4 up. At that point, though, the impetus switched again and Spain levelled before reaching the hill and then coming out on top after an error-strewn 12th to book their spot in the last eight.

The quarter-finals are race to 9 and take place over two sessions on Saturday with the semi-finals and final on Sunday. The BetVictor World Cup of Pool is broadcast live in over 100 countries around the world, including on Sky Sports and DAZN.

Canada beat Estonia in a dramatic hill-hill clash to reach the last eight of the BetVictor World Cup of Pool, while there were also wins for Philippines over Estonia and Greece against Chinese Taipei on Friday afternoon at the Morningside Arena, Leicester. 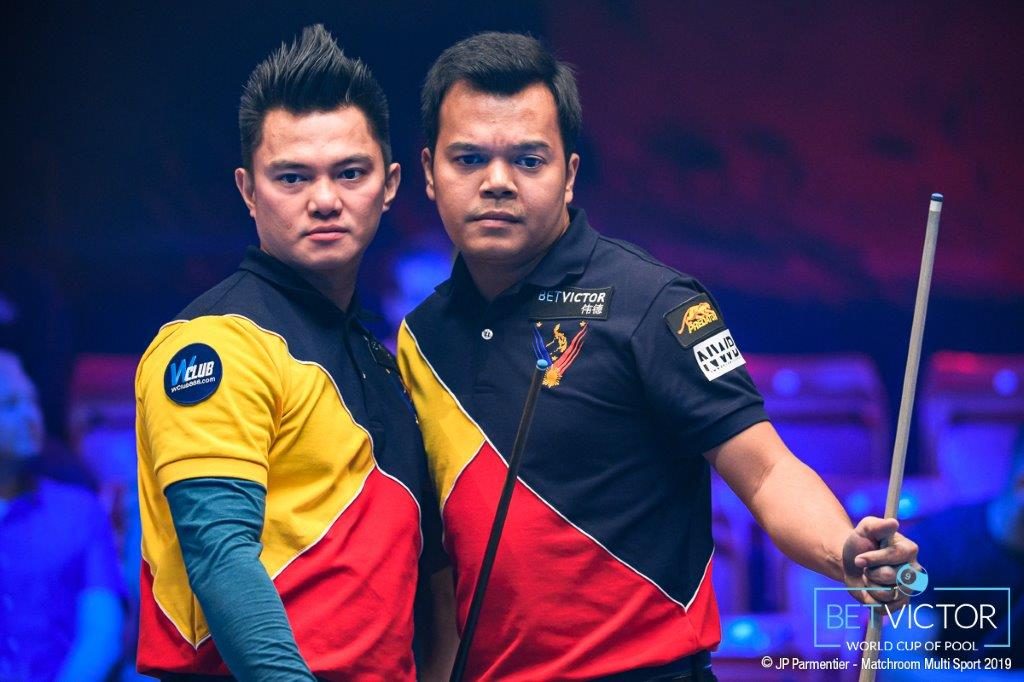 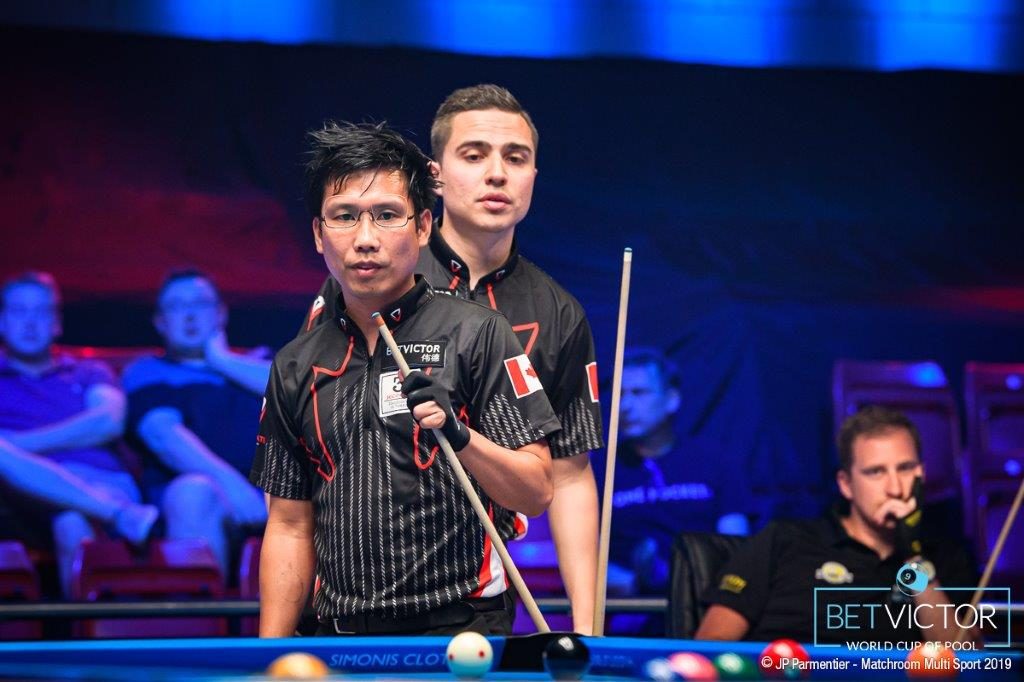 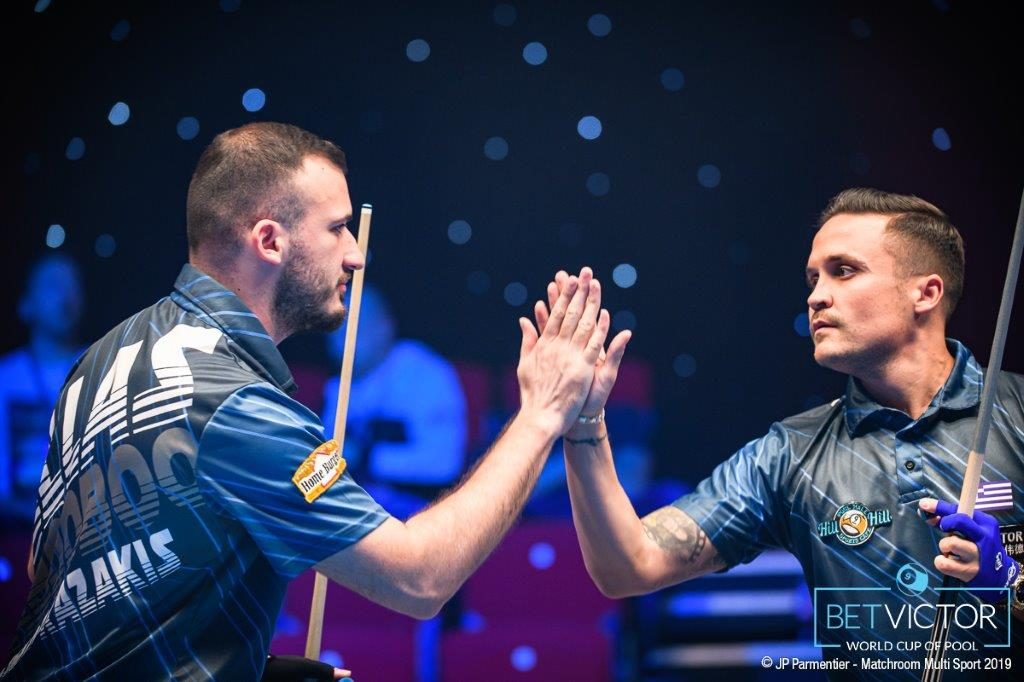 Three-time World Cup winners the Philippines (Carlo Biado and Jeff De Luna) fell 3-1 behind against the Albanian team of Eklent Kaci and Besar Spahiu but the Asian side then won five consecutive racks to reach the hill in the race-to-seven clash. Albania fought back and ran the tenth before benefitting from De Lunaâ€™s dry break in the 11th to cut the deficit to just one.

Then, with the match threatening to move towards hill-hill, De Luna pulled off a brilliant cut to the middle to make the 7 and the remaining two balls were easy for the Filipino pair, who have now equalled their 2018 showing of reaching the quarter-finals.

Theyâ€™ll meet Canada after Estoniaâ€™s Denis Grabe and Mark Magi snatched defeat from the jaws victory, a mistake from the latter gifting the match to Alex Pagulayan and John Morra when it looked like the Europeans would clean up at hill-hill.

Estonia took the lead with a smart 3/9 and when John Morra missed an 8-ball bank for Canada, it was an easy out for Estonia. They picked up two more racks and led 4-0 before Canada got on the board but when they did, they strung together a three-pack. A Grabe 5/9 gave Estonia a two-rack advantage and although Canada replied immediately, Estonia were able to reach the hill at 6-4 ahead.

Canada caught them and at 6-6 the pressure got the better of Magi, who played terrible position on the 7, locking the cue up against the object ball. Grabe then scratched trying to retrieve the situation, and Canada completed the set for the match.

â€œI donâ€™t know where to begin with that one,â€ said Morra. â€œWe struggled from game one but we fought to the bitter end so I am proud of us. We have to try and go back and feel how we did in the first match; we felt good and were in control but this time we got behind.

â€œWe lost to Philippines in 2012 where they had a big home crowd behind them, but this year we donâ€™t have to face that crowd, we just have to play well.â€

The sessionâ€™s closing match also went the distance. It was nip and tuck all the way between the Ko brothers Pin Yi and Ping Chung for Chinese Taipei and Greek duo Alexander Kazakis and Nick Malaj, and after ten of the 13 racks it was 5-5.

Greece were the first to the hill and had Kazakis breaking for the match. The one ball was down but there wasnâ€™t a shot on the two. Greece pushed out and after both teams visited the table, Ping Chung attempted to jump a group of balls in the centre of the table to reach the two, but sent the cue flying off the table. Ball in hand was what Greece wanted but Malaj played poor position on the 6 and Kazakis opted for the safety. They were soon back at the table and despite Kazakis being left a tricky shot on the 7, which he could only just see behind the 9, this time they closed out the match.

The second round concludes on Friday evening, with Great Britain against Poland one of three matches. The quarter-finals take place on Saturday with the semi-finals and final on Sunday. The BetVictor World Cup of Pool is broadcast live in over 100 countries around the world, including on Sky Sports and DAZN.