HOSTS OUT AS SPAIN AND AUSTRIA MAKE SEMIS

Hosts Great Britain are out of the BetVictor World Cup of Pool after a 9-6 quarter-final defeat to Spain, who will now face Austria in the semi-finals at Morningside Arena, Leicester.

Austria were in fine form as they defeated Greece 9-2, before the host pair of Chris Melling and Jayson Shaw fell to Spainâ€™s David Alcaide and Francisco Sanchez-Ruiz after the Spaniards pulled away in the latter stages of the match. 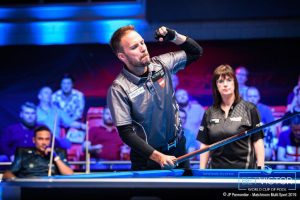 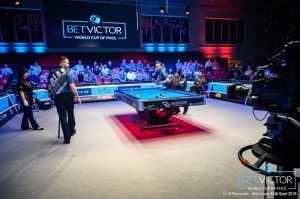 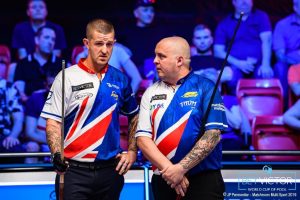 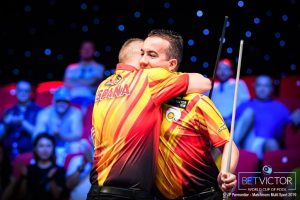 It looked as though the early lead would go to Spain, but Alcaide missed on the 8 allowing the hosts to steal a 1-0 lead. Spain levelled but a clumsy attempted snooker by Sanchez-Ruiz left the 6 on for Britain in the next, and Shaw and Melling cashed in.

The scrappy start continued but at 3-3 Great Britain ran out from their own break and had an opportunity to make it 5-3 until Shaw scratched in unfortunate circumstances. The teams exchanged two more racks to make it 5-5 in the race-to-9 before Alcaide spotted a 4/9 carom to put Spain within three.

At that point Melling scratched and Spain had a two-rack lead, the first time either side had earnt that margin in the match and they were soon on the hill at 8-5. Great Britain pulled one back when Shaw made a high-pressure 1/9 but it was their last rack of the tournament as Spain completed a 9-6 win to move into the semi-finals.

â€œMy partner played an amazing match,â€ said Alcaide. â€œI missed a couple of difficult shots but he gave me a lot of confidence.â€

Sanchez-Ruiz added: â€œAustria will be a tough match, they have two players who are two of the best in the world but we believe in our game and will stay focussed on the next round. We are only thinking round-by-round so for us, the semi-final is the final.â€

Austriaâ€™s Mario He and Albin Ouschan defeated Greek duo Nick Malaj and Alexander Kazakis to land their place in the last four. Austria had complete control of the early stages of the match and raced to a 4-0 lead. They looked sure to go five up but He missed a routine 9. The cue ball was on the rail but nonetheless it was a straightforward shot and it opened the door back into the match for Greece.

However, Kazakis and Malaj couldnâ€™t capitalise and the 2017 champions restored their four-rack advantage. In the next rack Ouschan pulled off one of the shots of the tournament, making a long one and bringing the cue back down the table via two rails for perfect position on the 2.

That helped Austria pull five ahead and more clinical shooting took them to 7-1. Greece got their second rack on the board in the ninth but it was too little, too late; Austria reached the hill in the tenth and were into the semi-finals at the end of the 11th, a 9-2 victory marking one of the standout performances of the tournament so far.

â€œWe had a pretty good start,â€ said Ouschan. â€œMario played some incredible shots and that gave us some confidence. They missed a few balls and didnâ€™t look too confident, but we took our chances.

The semi-finals take place from 1:30pm on Sunday afternoon with the final a race-to-11 which begins at 6.30pm. The BetVictor World Cup of Pool is broadcast live in over 100 countries around the world, including on Sky Sports and DAZN