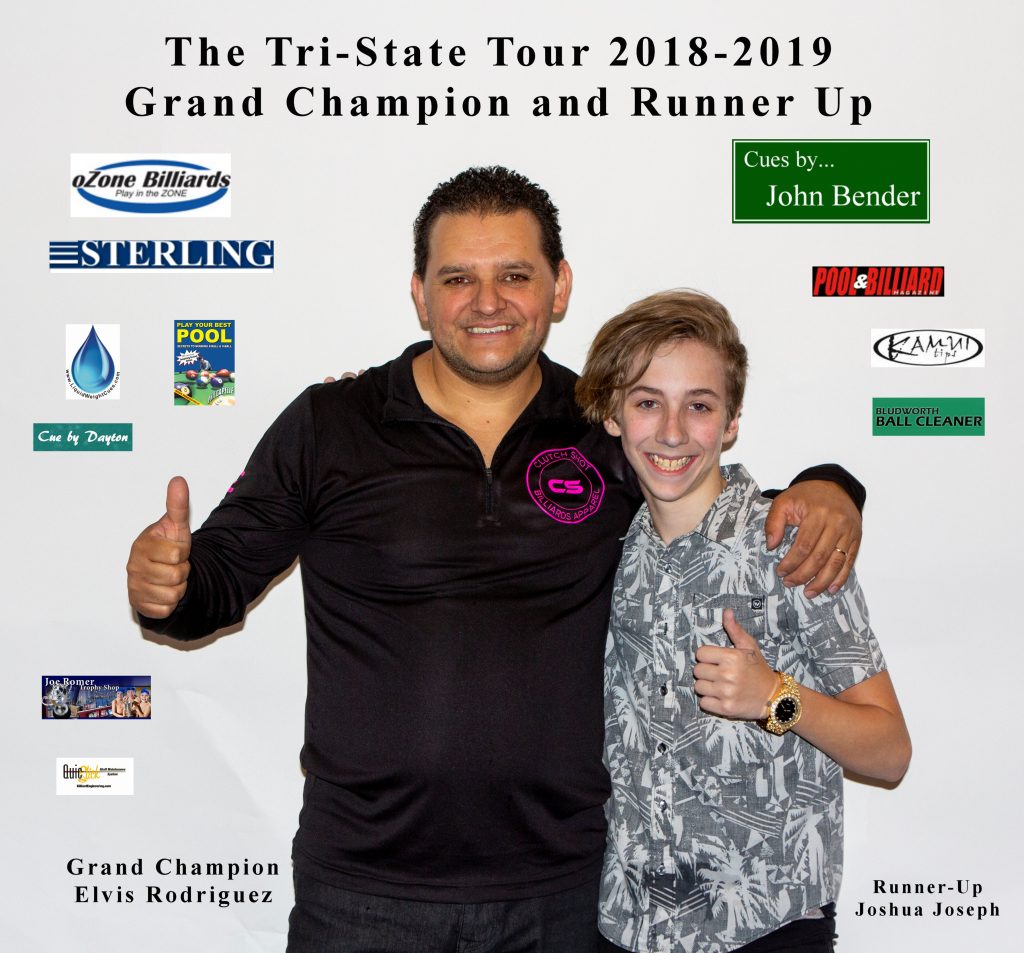 The twenty-third annual Tri-State Tour Invitational Tournament took place June 29 & 30, 2019 for the fifth straight year at Steinway CafÃ© and Billiards in Astoria, NY. Once again Steinway provided a great atmosphere and playing environment for the players. The owner Manny Stamatakis and the staff including Anna and George are always very professional, helpful and gracious. Steinway donated the room and all the table time. Their generosity and support to the players and the event as always were exemplary. The staff and everyone at the room assured the events success. Steinway CafÃ© and Billiards is an excellent venue for any event, it has professionally maintained tables, a clean fresh atmosphere and some of the most delicious food in NYC. The event was streamed live on AZBTV courtesy of UpState Al Leon and his son Joey. Al and Joey did a great job treating the amateur players to a professional quality stream and showcase for their talents.

The weekend was another huge success for the tour with a total of 83 players in the house. There were 13 A & A+ Players, 28 B & B+ Players, 32 C & C+ Players and 15 D & D+ Players who had earned their way in to compete in their respective classes and invited to play for their chance to be named the Tri-State Tour Invitational Grand Champion.

The organizers John Leyman , Todd Fleitman, Rick Shellhouse & Daniel Cintron planned for months to put together this event.Â Â  John Leyman was called away to be head referee for the World Cup of Pool in England and therefore missed the event. During the first day the players were congratulated on reaching the top of their classes for the season and awards were handed out to the top players of the year in each class. The Tri-State Tour added $3400 in cash prizes with another $1000 being donated to the prize fund by Dr. Michael Fedak making for a grand total of $4400.

Awards were presented to the top 3 players in each class, the Most Improved Player of the Year, and Sportsman of the Year. The Most Improved Player went for the second year in a row to Matthew Klein. Over the last 2 years Matthew has shown huge growth in his game Matthew started this season as a low B player and thru dedication, commitment to lessons and the game rose to become a Strong B+ Class player. He will almost certainly reach the A class by seasons end.

â€œSportsperson of the Yearâ€ award is awarded to someone the tour believes exemplifies what a player should be and how they should act. And this year it went to Bob Toomey, who throughout his seven years with the tour, always exhibited exemplary conduct above and beyond the average sportsperson.

The top players of the year in their respective classes were Max Watanabe in the A+/A class who was also last years A+/A Player of the Year, Jaydev Zaveri B+ player , who was the B class player of the Year for the 2017 and 2018 seasons. Bob Toomey became C+ Player of the Year after having been 2nd place in the C+ Class last season. Mac Jankov repeated last season as 1st in the C Class . This year, both the D+/D class and Ladies division Champion went to Shweta Zaveri. For a full list of winners for all the classes and events, please see the web site www.thetristatetour.com

Saturday , June 29th, 83 players showed up eager to play for the brass ring, The Overall Grand Champion of the Invitational. The format was single elimination, comprised of six orbits arranged by class of player (A+/A; B+; B; C+; C and D+/D). Players surviving the first round were guaranteed to proceed in the main event or return on Sunday for the Second Chance event. On day one, each orbit continued until the top two of each class, for a total of 12 players, remained undefeated to come back on Sunday, June 30th. Also 4 players from each class, having lost the second round could return to play in the Second Chance event .

In the B+ orbit, Nick Limberatos and Dave Shlemperis made it to day 2, with Eugene Ok and Amir Rashad Uddin finishing 3rd/4th. Nick was in top form as he gained control of the match for an 8 â€“ 4 victory over Dave Shlemperis. Nickâ€™s winning trail included Paul Wilkens 8 â€“ 7; Shivam Gupta 8 â€“ 3; Eugene Ok 8 â€“ 4.

The match between the winners of the B+ and B class featured Nick Limberatos in control of the entire match with Mike Mele. His control earned him a 7 â€“ 2 victory.

Greg Matos clearly outclassed the C class players as he went through the field with wins over Ryan Dayrit 7 â€“ 1; Jim Gutierrez 7 â€“ 1; Luis Lopez 7 – 3 and Juan Melendez 7 â€“ 1 in the Finals. Greg is to be congratulated as he moves up into the C+ class. Weâ€™re certain to hear more from Greg in the future. The 3rd/4th place finishers were Allison LaFleur and Luis Lopez.

Greg Matos continued his winning streak and won the C+/ C match in the same fashion as Nick Limberatos. Greg took control of his match with Alfredo Altimarano finishing him off with a score of 6 â€“ 2.

In the D+/D class, young , Joshua Joseph displayed his potential as he flew through the field. His wins included Sung Lee 8 â€“ 0; Amanda Andries 6 â€“ 4; Jake Kislowski 6 â€“ 1 and Debra Pritchett 6 â€“ 3. Later he proved this was no fluke. The 3rd/4th place finishers were Bianca Martinez and Jake Kislowski.

The match between Greg Matos winner of the C+/C grouping and Joshua Joseph from the D+/D orbit was a landslide victory for Joseph 6 – 1.

With Nick Limberatos hailing from the B grouping and Elvis Rodriquez victorious in the A+/A orbit, the match between the top of the B groups and A groups was set in motion. Elvis continued to dominate with a 7 to 4 victory. Now the stage was set for the Finals.

Meanwhile, The Second Chance event was also in full swing. The format was a split charted field with B through A+ players on the top and D through C+ on the bottom half. On the top side, Matt Klein backed up his Status as Most Improved Player. Matt ascended to the finals having defeated Kevin Shin 8 â€“ 5 and Nate Raimondo 7 â€“ 5. On the bottom half of the field, Amanda Andries defeated Suzzie wong 6 â€“ 3; Jim Gutierrez 6 â€“ 0; and Richard Racioppi 6 â€“ 3 to face Matt in the Finals. The match between them called for Matt to give Amanda 4 games in a race to 9. In the beginning Amanda, by virtue of the spot and some good play, led the match. Amanda managed to hold her own and reached the hill 8 â€“ 6 going to 9. Matt won the next game, but in the 12th rack, hung the 9 ball as he was about to tie the match double hill. Congratulations Amanda Andries winner of the Tourâ€™s Invitational Second Chance event. 3rd/4th went to Nate Raimondo and Richard Racioppi.

In the fight for the Overall Grand Champion, young Joshua faced the imposing A+ player Elvis Rodriquez. Elvis was not to be denied the championship even though he was giving 6 games on 11 to his opponent. The A+ player used his superior knowledge of defense to neutralize Joshuaâ€™s spot. With Elvisâ€™ defensive strategy, the match became lopsided as Elvis reached the finish line 11- 6. Congratulations Elvis Rodriguez â€“ 2019 Tri-State Tour Overall Grand Champion