Feijen Comes From Behind to Terminate Fortunski in Diamond Finals 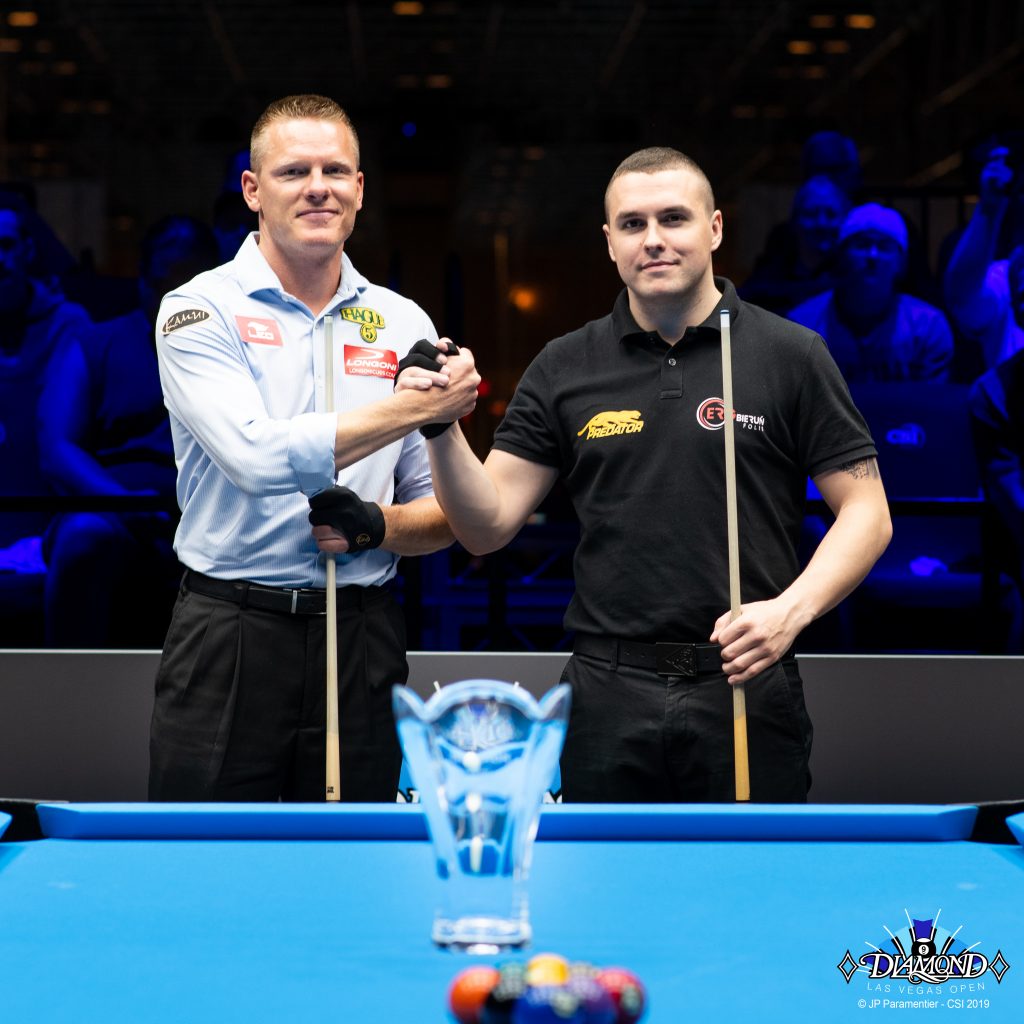 This weekend in Las Vegas the moniker may not have been more appropriate as the former World 9-ball champion left 105 professional players in his wake. Feijen saved his most dramatic exhibition for last, clawing back from a 7-5 deficit with two breaks and runs and some stellar safety play to defeat Polandâ€™s Miezsko Fortunski, 9-8, in the championship of the inaugural Diamond Las Vegas Open Saturday night at the Rio All Suites Hotel and Casino.

â€œI made three quality outs to go from down 7-5 to up 8-7,â€ said Feijen. â€œOverall, I think I played solid and I exploded at the right moments.â€

Playing late into the Nevada night, the two players split the first 10 games as they struggled to find their games in the first half of the match Both players broke dry twice, missed shots twice and Feijen committed an uncharacteristic foul. Fortunski clawed ahead 6-5 after a victorious safety exchange on the 1-ball then appeared on the verge of adding to his lead in the 12th game but misplayed position on the 8-ball, ultimately missing a side pocket bank shot. Moments later, Fortunski was bailed out when Feijen, attempting to pocket the same ball and draw the cue ball the length of the table for position on the 9-ball, scratched.

The Dutchman broke and ran in the 13th game and was able to pull even yet again with Fortunski with victorious safety exchanges on the 1 and 2 balls in the following rack. He took the lead and climbed onto the hill with another slow and methodical break and run in the 15th game.

At the table with the break in the 15th game, Fortunski had no room for error. Making matters worse, he struggled with cue ball positioning throughout the rack. After pocketing the 2-ball he sent the cue ball two rails and found his path to the 3-ball blocked. After pocketing the 3-ball after hitting the side rail first the cue ball offered a sharp cut on the 4-ball but no path to the 5-ball. After contemplating the shot for a good four minutes, Fortunski pulled the trigger, pocketed the object ball and discovered his path to the 5-ball covered by the 8 and 9 balls.

â€œI was trying to make the balls and get the best shape that I could,â€ Fortunski said through a translator after the match.

For his next trick, he executed a one rail kick shot which deposited the 5-ball in the opposite corner pocket.

At last, Fortunski appeared positioned to tie the game. That was, at least, until he committed a foul when he struck the 9-ball while attempting to pocket the 8-ball. Given ball-in-hand, Feijen landed the final two balls to clinch the victory.

Feijen, the lone remaining undefeated player in the 106-player event when the championship match began, reached the finals with a commanding 7-2 performance against Fortunski in the winnerâ€™s side final. The Dutchman used two breaks and runs and a missed 2-ball by Fortunski to build a quick 3-1 lead, then added on three more racks after another Fortunski miss in the fifth game, a victorious safety exchange in the next game and a dry break by the young Polish upstart in the seventh rack.

Fortunski made his way over to the one-loss side where he faced a red-hot Skyler Woodward, who earned his way into the final four with victories against Eklent Kaci and Kun Lin Wu. Woodward used a handful of unforced errors by Fortunski to build an early 3-1, then began struggling with finding an opening shot off the break during the middle stages of the set. By this point, Fortunksi was the hot player â€“ breaking and running three times while capitalizing on Woodwardâ€™s breaking struggles to win six of the last seven games to earn a re-match with Feijen in the championship game.

The Diamond Las Vegas Open is a presentation of Cue Sports International and is the first half of a professional pool double-header in Las Vegas these next two weeks. Next week, 64 of the poolâ€™s best will compete at the $100,000 added Predator World 10-Ball Championships which begin Monday at the Rio. Both events are being broadcast live by CSI for free on YouTube. For more information on the tournament or for links to live YouTube streaming, please visitÂ www.world10ball.com