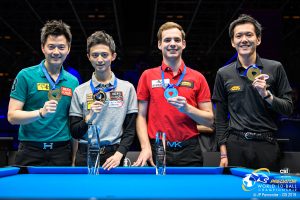 Four years ago, a 19-year-old Ping-Chung Ko was eliminated in the semifinals of the World Pool and Billiards Associationâ€™s World 10-Ball Championship and watched from stands as his older brother, Pin-Yi Ko, claimed the tile over Carlo Biado.

â€œI was happy for my brother, but I think if I would have been the winner that may have been better,â€ the younger Ko said with a laugh through a translator.

The roles were reversed Friday night, as the younger Ko used a combination of brilliant shot-making and some late match mistakes by opponent Joshua Filler to claim the Predator World 10-ball Championship at the Rio All-Suites Hotel and Casino. The win is the first major victory for Ko, who has come close in big events in recent years but hasnâ€™t been able to close out until this week in Las Vegas. Last year, Ko finished second at the International 9-Ball Open and had top-10 finishes at the China Open and World 9-Ball Championship.

Filler jumped out to an early 3-1 advantage in the finals, using two breaks and runs and a dry break from Ko. After the two players traded breaks and runs in the next two games, and Ko took a restroom break immediately following Fillerâ€™s pocketing of the 10-ball. The elder Ko followed along with his little brother, more to be there as a security blanket than to coach or offer advice.

â€œHe didnâ€™t really say anything to me,â€™ said Ping-Chung Ko. â€œJust having him walk with me relaxed me.â€

The timeout paid dividends for Ko, who used missed shots by his opponent in the seventh and ninth racks to pull to within 5-4. Momentum really shifted in Koâ€™s favor in the crucial 10th game. Without a clear shot on the 1-ball, the German attempted a safety and left a long open shot instead. Ko pocketed the ball and ran out the rack to tie the score, then mixed in a break-and-run to take the lead. Filler tied the score at six each and had an opportunity to regain the lead in the 11th game when Ko misplayed a safety on the 5-ball, but couldnâ€™t capitalize â€“ missing a somewhat routine combination shot on the 9 and 10 balls.

â€œBoth matches today, I played pretty solid at the start of the match but I couldnâ€™t get a good lead,â€ Filler said. â€œI didnâ€™t have a chance to get three games ahead. Then I missed some balls.â€ 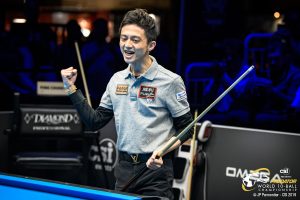 Ko was clutch in the closing stages, executing a sharp cut on the 3-ball and bank on the 4-ball to run out the 15th game and regain the lead, 8-7. When Filler broke dry in the next game, Ko used a challenging one-rail kick shot to pocket the 3-ball and run out the rack and climb onto the hill, 9-7.

Needing one more win for the championship, Ko broke in the 18th game and authoritatively banked the 1-ball into the side pocket â€“ as Filler sat in his chair simply nodding in appreciation.

â€œThatâ€™s really when I felt like I could win this,â€ he said.

As he stroked his way through the final balls, a packed crowd sensed the victory â€“ including a dozen family and fans who had traveled from Chinese Taipei. After landing the 5-ball and sending the cue ball two rails down table for the game winning 9 and 10 balls, the elder Ko let out a sigh of relief.

â€œI was nervous until he made the last two balls,â€ he said.

Filler was plagued with mistakes throughout the day. He reached the finals by surviving a handful of uncharacteristic unforced errors throughout the match, defeating the elder Ko, 10-8.

The reigning WPA World 9-ball champion looked like he could be giving the assembled crowd an early dismissal, jumping out to a 3-0 lead on the strength of three victorious safety exchanges. Filler was cruising through the fourth rack as well but missed a makeable cross-side bank shot on the 3-ball into the side pocket. Ko took full advantage, clearing the table and adding three breaks and runs in route to winning five of the next six games to capture the lead, 5-4. Filler broke and ran out in the 10th game, tying the score at five apiece before the two competitors took a brief intermission.

Everything that went right with Koâ€™s break before the intermission was nowhere to be found in the second half â€“ failing to pocket a ball off of the opening shot three times. After Ko inched ahead once more time, 6-5, after a victorious safety exchange, Filler broke and ran twice and took advantage of back-to-back dry breaks from his opponent to charge ahead, 9-6.

â€œI was criticizing and questioning myself, and thatâ€™s why I didnâ€™t do well on the breaks,â€ Ko said through his translator.

The German appeared positioned to run out the 16th game and advance to the finals but missed position on the 5-ball. Filler again had a chance to close out the match in the next rack when Ko again failed to pocket a ball on the break, but missed the 2-ball in back-to-back opportunities.

â€œOverall, I think it was just a bad day for me,â€ Filler said.

Filler initiated a safety exchange when he didnâ€™t have a clear shot at the 1-ball after his break in the 18th game. He found an opening after Ko left the 1-ball visible down at the opposite end of the table from the cue ball. The German pocketed the ball and meticulously worked his way through the rack to earn a spot in the eveningâ€™s finals. Fillerâ€™s go-to move after pocketing the game-winner in a final round is to yell and pump his fist. Not this time, as he collapsed onto the table in relief instead.

â€œI wasnâ€™t very lucky. Every time that Filler missed, I didnâ€™t have a good position to shoot,â€ Ko said.

Although heâ€™d been eliminated, baby brother Ping-Chung Ko still had an opportunity to keep the family alive with a victory in the next semifinal match against Masato Yoshioka of Japan. 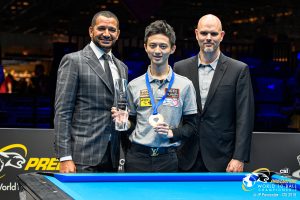 â€œThe only words I have for my brother is, â€˜release your pressure,â€™â€ Ko said. â€œI donâ€™t want to see him under any pressure.â€

If the young Ko was feeling any kind of pressure, he certainly didnâ€™t show it at the table. Using stifling safety play as well as pinpoint accuracy when an open shot was available, Ko won five of the first seven racks of the game and cruised to an easy 10-3 victory.

After Yoshiota claimed the first game of the match, Ko took advantage of a foul, scratch and a victorious safety battle to build a 4-1 advantage. His Japanese counterpart, who was the last remaining player in the event who qualified by winning a regional qualifier tournament, tacked on a break-and-run and took advantage of a Ko scratch to narrow the deficit to 5-3. However, Ko continued to hit the gas pedal â€“ breaking and running in the ninth and 11th racks as he won the last five games of the match. 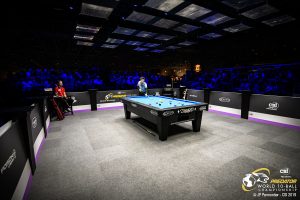 â€œMy main objective was to just get the experience internationally, but when I got to the semifinals, I felt a lot of pressure. Thatâ€™s why I didnâ€™t play in a way that I want to play,â€ Yoshiota said.

The Predator World 10-ball Championship is a presentation of CueSports International and sponsored by Predator Group. Predator Group is an international billiard industry leader with a focus on high-performance cues and shafts as well as bringing constant innovation and game-improving equipment to billiard players worldwide. The event is being hosted by the Rio All-Suites Hotel and Casino and broadcast live on YouTube by CSI Media, a subsidiary of Cue Sports International. For more information, visit www.world10ball.com