LAKE SAINT LOUIS, MO (July 11, 2019) â€” A record number of aspiring young APA members from across North America made their way to St. Louis, Mo., in late-June for the APA Junior Championships.

After four-days of having fun, making new friends from across the country and playing their hearts out on the pool table, four new champions were crowned in each tier of the Junior Championships.

In the finals of the Green Tier (skill levels 1-2), Giovanni Gambone of Gloucester City, N.J., defeated Robert Randall of Red Bud, Ill. Evan Sneed of Eligin, Okla. and Rayshard Buwalda of Des Moines, Iowa, tied for 3rd Place in the Green Tier which featured the largest number of competitors in this yearâ€™s event with 225 participants. 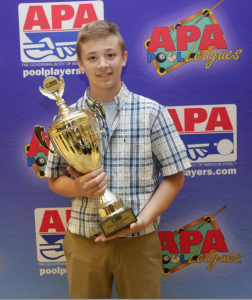 Giovanni Gambone
In the finals of the Green Tier (skill levels 1-2), 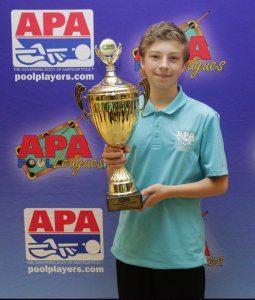 , Wyatt Neeley of Dalton, Ga., defeated Jaden Bolyard of Decatur, Ill. Benjamin Gonzales of Normal, Ill., and Jaden Oglesby of Harrisburg, Ill., tied for 3rd Place in the White Tier which had 101 participants. 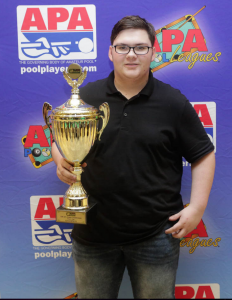 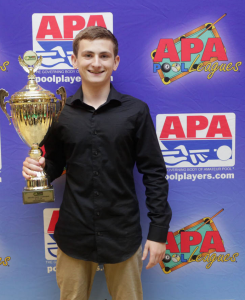 and a special exhibition and autograph signing by â€œThe Black Widowâ€ Jeanette Lee.

Nationwide Insurance was the Presenting Sponsor of this yearâ€™s APA Junior Championships.

The APA, based in Lake Saint Louis, Mo., sanctions the worldâ€™s largest amateur pool league, known as the APA Pool League throughout the United States, and as the Canadian Pool League in Canada.Â  Nearly 250,000 members compete in weekly 8-Ball and 9â€‘Ball League play.Â  The APA is generally recognized as the Governing Body of Amateur Pool, having established the official rules, championships, formats and handicap systems for the sport of amateur billiards.

The APA and its championships are sponsored by Aramith, Action Cues, PoolDawg and Valley-Dynamo.