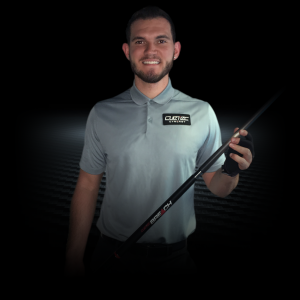 Hasbrouck Heights, NJ, September 11, 2019 â€“ Cuetec and Imperial are proud to announce that Billy Thorpe has joined the Cuetec Team of Professional Players and Brand Ambassadors.

“Weâ€™re thrilled to have Billy join our team. His game has really progressed over the past few years and his performances at the Mosconi Cup and at the World Pool Series have not only showcased his talent, but his boundless energy and enthusiasm for the game. Having only just turned 23 years old, Billy has a tremendous future ahead of him, and Cuetec is excited to support Billy on his journey,â€ said Kyle Nolan, Cuetec Brand & Communications Manager.

“When you consider my age, Iâ€™m pretty green still, but I also believe that I have a lot more game still inside of me. I want to bring that game to the table and having the support of a company like Cuetec behind me, makes that all the easier. When I sat down with Cuetec, it was great to learn how committed they are to developing amazing high-performance cues. Donâ€™t sleep on Cuetec, the new Cynergy technology is the real deal,â€ said Billy Thorpe when he was recently asked about joining team Cuetec.

Look for Billy next at the International Open and around the world as he competes against the worldâ€™s best.

Cuetec burst onto the billiard scene in 1989, developing the composite cue. Today, Cuetec prides itself on offering the most technologically advanced wood and composite constructed cues and shafts, providing players with high-performance playing equipment at affordable prices. For more information, please visit www.cuetec.com. Follow us on Facebook: https://www.facebook.com/CuetecUSA

Imperial is the exclusive distributor for Cuetec in the United States. Imperial and Cuetec work together to maintain that professional quality players and cherish. Imperial is the premier distributor of billiards equipment and licensed products from the NFL, MLB, NHL and several high-profile colleges and universities. With over 60 years of experience, Imperial has made a name in the industry with some of the most well-crafted pool tables and accessories on the market with price ranges to fit any budget. Add a huge assortment of licensed product and there is no other company that you will need to look to for your game room, dorm room and man cave needs. For more information, visit http://www.imperialusa.com. Follow Imperial on Twitter, Facebook and Instagram @imperial_gameroom.