FILLER FALLS IN DRAMATIC UPSET, WHILE VAN BOENING ALSO CRASHES OUT Finlandâ€™s Casper Matikainen takes down the defending champion in wild day in Doha as 32 players set for a sprint to the World 9-ball crown.

One loss side group matches
Winner moves on to final 64 KO stage. Loser is out

Â (Doha, Qatar)–If the first dayâ€™s play of the 2019 World 9-ball Championship is any indication–and by all measures it certainly is just that–then fans around the world better be prepared for a wild roller coaster ride over the next three days.Â  Drama, upsets, nerves, revelations, suprises, excitement and downright brilliant 9-ball at the highest levels were all on display as play commenced in the 28th running of poolâ€™s premier crown. And with a loaded field just getting warmed up, itâ€™s only going to get better leading to the final on Tuesday.

With 64 matches played on 16 tables at the Qatar Billiards and Snooker Federation in Doha, Day 1 saw 32 players book their spots in the final 64 knockout stage which begins Sunday.Â  None of the 96 players have yet to see the exits, but there were plenty of upsets, near upsets, and upstarts making their mark on poolâ€™s biggest stage.

The top 32 seeds were given a bye in the first round of their groups, so these players only had to win one match to reach the single elimination knockout rounds.Â  Defending champion Joshua Filler of Germany did just that, but not before a shaky start which saw him tied at 4-4 in the race to 9 alternate break match against Qatari veteran Bashar Hussain. The World number one was never in trouble, though, and cruised to a 9-5 win.

2017 champion and runner up last year Carlo Biado of the Philippines didnâ€™t fair as well as he got dumped over to the one loss side of his group with a shocking 9-3 loss to Chileâ€™s Enrique Rojas. It was Rojasâ€™ second straight victory of the day, the first coming over Kuwaitâ€™s Abdullah Alyusef. Rojas now books his well deserved spot in the Final 64 tomorrow.

The USAâ€™s Shane Van Boening is one of the favorites here this week, but he looked a bit cold early on in his match with young talented Chinese player Xu Xiaocong. Xu is part of a large crop coming from Chinaâ€™s youth movement and he had the American down three quarters of the way through their match.Â  But SVB pulled it together at the last minute and squeaked by the Chinese, 9-8. Xu will get one more chance on Sunday.

Fellow American and Mosconi teammate Billy Thorpe also booked his spot in the final 64 with a 9-5 win over Canadaâ€™s Stephen Holem. 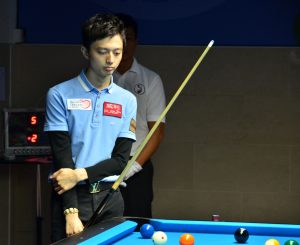 It was a solid day for team Taiwan. World 10-ball Champion Ko Ping Chung went up against Myamarâ€™s rising star Phone Myint Kyaw, who also goes by the moniker, Muang Muang. Kyaw is a player that pool fans will want to pay attention to. Heâ€™s a former snooker player who has been winning regularly on the brutally tough Chinese 8-ball circuit, and he just grabbed two gold medals in the Southeast Asian games in Manila.Â  His stroke is one of the most solid in the game and anyone who watches him play instantly can see the potential in this young man.

But of course, Ko is a young prodigy who has already proven his metal in American pool with his recent win at the World 10-ball in July in Vegas.Â  Little Ko didnâ€™t have much trouble with Muang Muang, winning handily, 9-4. 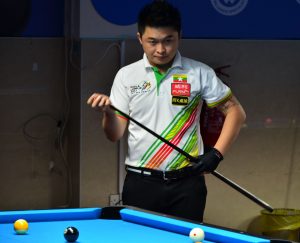 Little Ko will join his older brother Pin Yi in the final 64, who defeated the always stingy Jalal Al Sarisi of Venezuela, 9-4.Â  Other Taiwanese cruising into the final 64 include Chang Jung Lin, Chang Yu Lung, and Kevin Cheng.

The Philippines is surprisingly unrepresented in Doha this year with only four players in the field. With Biado losing early it was up to Johann Chua and Jeffrey Ingacio to save the day for the Pinoys. Both looked the goods and nabbed spots in the final 64.

It was a mixed bag for the European Mosconio Cup team. Greeceâ€™s Alexander Kazakis is one of Europeâ€™s top bets here this week and he qualified for the knockout round with an easy 9-5 win over Qatarâ€™s Waleed Majid.Â  But Albaniaâ€™s Eklent Kaci and former World 9-ball Champion Niels Feijen of the Netherlands werenâ€™t so fortunate. Kaci lost big to the Netherlandsâ€™ Ivar Saris, who had earlier looked solid in a 9-6 win over Polandâ€™s Karol Skowerski. Feijen went down to upstart Hong Konger Yip Kin Ling, 9-7, who took his spot in the Final 64 with his second Â win of the day.

The surprises kept coming throughout the day. Lithuaniaâ€™s Pijus Labutis first squeaked by Peruâ€™s Gerson Martinez, 9-8. Then he took on former World 9-ball Champion Wu Jiaqing, and shocked the Chinese great with a 9-7 upset, and a spot in the knockout rounds. 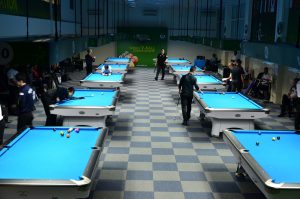 Muang Muang, MyanmarPlay on day 2 on Sunday, Dec. 14th will begin at 10am Doha time(GMT +3). The field will be whittled down to 64 players playing single elimination knockout race to 11.Â  The round of 64 will be completed in the first two session, and by the end of the day, the field will be down to the final 32.

Fans around the world will be able to view live scoring, results, brackets and live streaming of many of the matches via the QBSFâ€™s free live streaming platform at esnooker.pl.Â  Multiple tables will be available to view online at no charge to the public.

Winners Side Matches Day 1.
Winner is through to the Final 64, Loser goes to one loss side of their group for one more chance