LAKE SAINT LOUIS, MOÂ (April 28, 2020) â€” As poolplayers across North America patiently wait to get out of the house and back on a pool table, APA is taking a proactive approach trying to ensure its 2020 Las Vegas championships ultimately take place if the pandemic subsides enough to make pool tournaments possible later in the year.

APAâ€™s goal is to hold its 2020 Championship events, if it is safe to do so.Â  Therefore, APA has worked with its hosts at the Westgate Las Vegas to move its events to later in the year.

â€œWe have concerns about whether or not an event will be possible in Las Vegas in August, but at this point, itâ€™s hard to know how things might look three or four months from now. We felt we needed to do everything possible to ensure the APA World Championships could take place this year if we can do so safely,â€ said APA President Greg Fletcher.

â€œWeâ€™ve bought ourselves some time to make decisions in response to what happens with the pandemic in the next few months,â€ he added.

Fletcher also indicated that no event would take place in Las Vegas unless local and state officials indicate itâ€™s overwhelmingly safe to do so.

â€œWe arenâ€™t going to ask our members or our staff to do something that would jeopardize their health,â€ said Fletcher.

The move will give APA Leagues across the country more time to resume League play and to schedule playoff and World Qualifier events to determine which teams will qualify for the World Championships.

If the APA World Pool Championships ultimately cannot be held in 2020, APA would work with its League Operators on how players fund monies allocated to send teams to Vegas will be awarded.

â€œWeâ€™re less confident about an August event at this point, but this at least gives us a chance to host these events this year if the pandemic situation improves in the next couple of months,â€ said APA Tournament Director Bill Tufts.

â€œWe realize it might be a long shot, and we certainly will not host an event if we believe itâ€™s unsafe to do so, but we owe it to our members who qualified for these events to get a chance to play if we can give them the opportunity to do so,â€ he added.

Players that qualified for this yearâ€™s 8-Ball Classic and 9-Ball Shootout will still get a chance to play in the event they qualified for.Â  Those events, previously scheduled for the 2020 APA Poolplayer Championships that were scheduled for this month (April/May), are being moved to April 2021 and held in conjunction with next yearâ€™s event.Â  Dates for next yearâ€™s event will be forthcoming.

The combination of the 2020 and 2021 events will make for the largest Poolplayer Championships ever in terms of payout and participation. Players who qualified for the 2020 event will receive travel assistance funds and hotel lodging at next yearâ€™s event.

â€œWe wanted to do whatever we could to honor the hard work and dedication people put into qualifying for these events, and we want to give them a chance to live out their dream in Las Vegas if possible,â€ said Tufts.

The plan gives APA a potential opportunity to host all of its Las Vegas events without permanent cancellation, but itâ€™s important to recognize plans will ultimately be dictated by what happens with the COVID-19 pandemic over the next several months.

APA is still evaluating its Junior Championships scheduled for June in St. Louis, but Tufts recognized itâ€™s highly unlikely the event will be able to take place.

â€œDefinitely a long shot for the Juniors event; we have a little more time, but we think itâ€™s highly unlikely this event will be able to take place as scheduled,â€ said Tufts.

For more information on the American Poolplayers Association, visitÂ https://poolplayers.com/.â€‹ 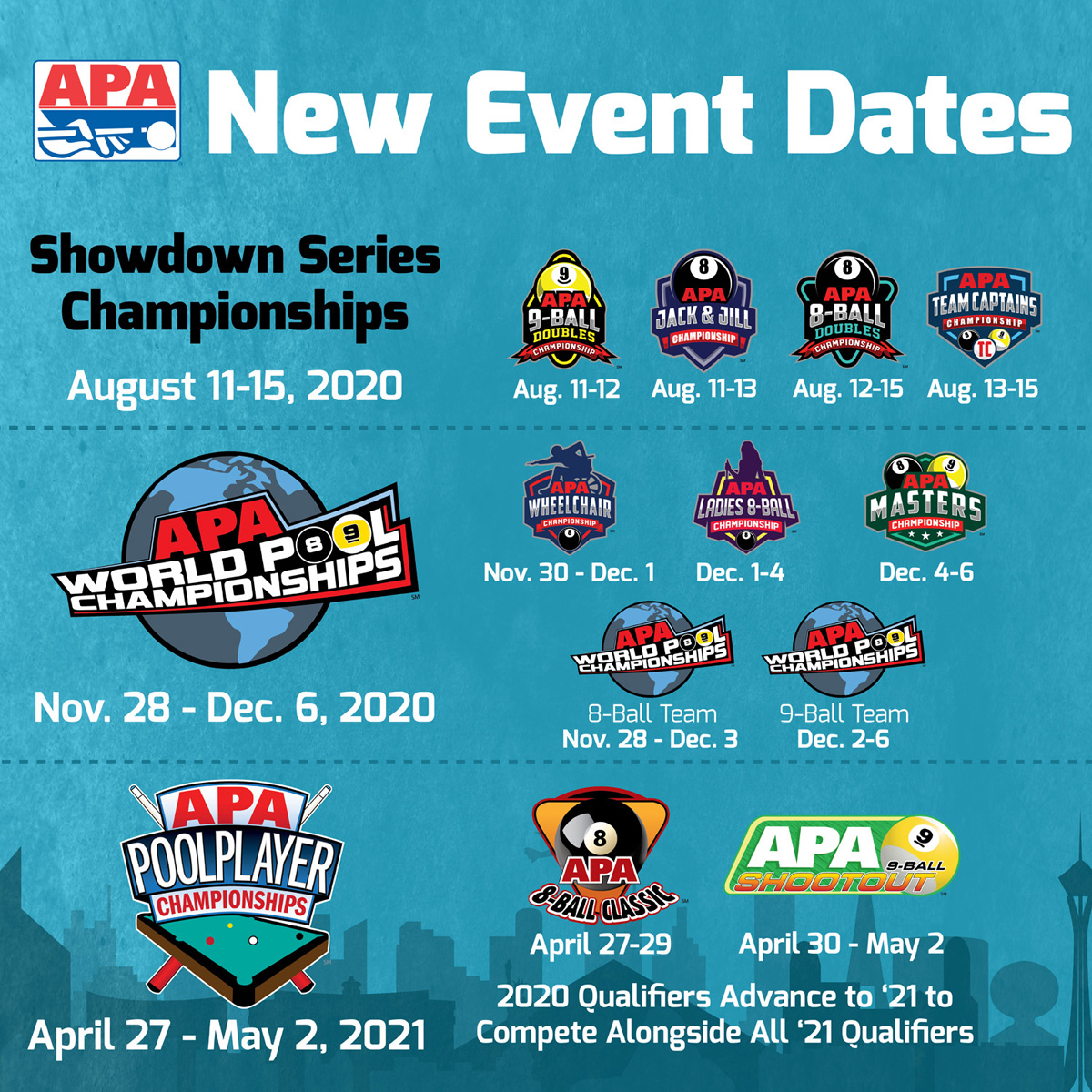