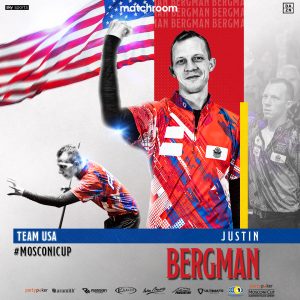 Justin Bergman and Fedor Gorst will represent Team USA and Team Europe respectively at this Decemberâ€™s partypoker Mosconi Cup as the top player on each teamâ€™s current rankings.

Due to the Covid-19 pandemic, no ranking events have been staged since the Diamond Open in March. However, Matchroom Pool and team captains Jeremy Jones and Alex Lely wished to respect the achievements of players who had played the ranking events which had taken place. Therefore, it was agreed that the top player from each the USA and European ranking would automatically qualify to play in the partypoker Mosconi Cup with the remaining four players selected as captainâ€™s wildcards.

That means a fifth appearance on Team USA for Bergman, who was part of last yearâ€™s winning team. For Europe, 20-year-old World Champion Fedor Gorst will make his debut on Lelyâ€™s team.

â€œI was very happy when I got the call from Alex,â€ said Gorst. â€œI was thinking that I deserved to be on the team this year, not only because I won the World title but because I feel that I have progressed as well. 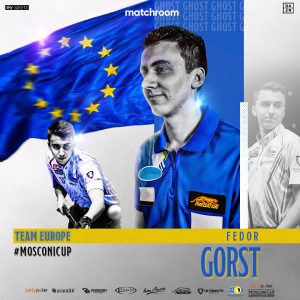 â€œIt is every playerâ€™s dream to be a part of the partypoker Mosconi Cup. Last year I tried very hard to be on the team and played all the qualification events. I missed one Euro Tour because I had a virus and I lost the very last match against Alex Kazakis to be on the team.

â€œI really donâ€™t know what it is like to play the partypoker Mosconi Cup. I am sure the pressure is very big because of the crowd and the atmosphere and the importance of the tournament. I have good coaches around me and I will practice hard and be prepared.

â€œI have had a few practice sessions with Alex already, through Skype. I have also spoken to [former European and American coach] Johan Ruijsink about it, so I am starting my preparation with four months to go.â€

European Captain Lely added: â€œI am happy to have Fedor on board. He is young, he is more than a talent; he is now a proven champion. He is a smart guy, he is a sociable guy, and he is very coachable, so for myself and [vice-captain] Karl Boyes it is perfect to have him on the team.

â€œAs a person, and how he has grown as a player, he has learned to be open for input and feedback. He is a stand-up guy and he is really mature for his age, on and off the table. I will always check and see with the players how receptive they are, but with Fedor he is always firing away many questions, he is so hungry for knowledge.â€

Lely and Boyes will now choose four wildcards to join the team, and those players will be announced over the coming weeks. However, with pool tournaments on hold due to the Covid-19 pandemic, Lelyâ€™s ability to assess the players is restricted.

â€œIt is very difficult because we are limited to see the players in action, although many of the top players in Europe are entering these challenges online,â€ he said.

â€œI have tried to keep in contact with some of the usual players you think about when you think about Team Europe, but it is not the perfect scenario right now. I would rather see them in action in the States, in Asia, in Europe, and get a real feel for where their form is. But we will try and keep as good a contact with the players as we can.â€

Team USA captain Jones was pleased to see Bergman as his sideâ€™s automatic qualifier and believes the Illinois man is a perfect fit for the roster.

â€œBergman is one hell of a player, many have considered him one of the top three in the US for some time,â€ said Jones. â€œIt was good for me and good for Joey that he was at the top of the rankings, it worked out a good deal for USA.

â€œSome might say he is a quiet guy, but when he speaks itâ€™s exactly what needs to be said. He has an incredible mind and has competed at a high level in big tournaments since he was a junior. He always wants to play as well as the game will allow and last year sometimes didnâ€™t get the opportunities.â€

Jones and vice-captain Joey Gray will now work with a group of seven players, including Bergman, to select the final four players on the team. That will include video coaching sessions and limited-contact sessions with Jones and Gray, restricted to no more than two players each time. That wider group features Shane van Boening, Skyler Woodward, Billy Thorpe, Tyler Styer, Chris Robinson and Corey Deuel, and Jones will begin selecting his first wildcards later this month.

â€œIt will be one-on-one training, with three guys coming in this month and four more in September. We have the five players from last year, of course Justin is already on the team, and then we add Corey Deuel and Chris Robinson. Corey is full of experience and was on a winning team just two years ago, and Chris has been trending in the right direction, and both were right up there on the rankings.â€

The partypoker Mosconi Cup will take place at Alexandra Palace, London, this December 1-4, live on Sky Sports and DAZN.

Matchroom Pool are still hopeful and determined the partypoker Mosconi Cup will take place this year and are in constant detailed discussions with the relevant organisations and personnel to stay up to date. Our highest priority is the safety of everyone connected with the event however we are working hard to explore every avenue to making this work and will continue to do so, if it is possible.