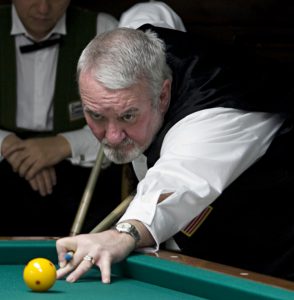 Jim Watson, a long-time American player of both pocket and carom games, died in the first week of September, 2020. Details are still emerging, but it appears he died of a heart attack. Jim had had heart problems for a number of years and had open heart surgery two years ago.

Jim, or â€œJimmy,â€ as he was more often called, was a retired MTA worker and a former union official. He once owned a billiard hall. He first started playing the pocket games, and was quite good at 14.1. He drifted to three-cushion and was at one time a possible answer of the question: “Who is the best American-born three-cushion player?”

Perhaps the highlight of his playing career came in 2014 at the summer tournament at Carom CafÃ©. Facing off against Kyung-Ryul Kim, then ranked 8th in the world, Jimmy jumped off to a commanding lead in a race to twenty-five. The formidable Korean charged back, closing the gap. Jimmy missed, and Kim pulled even at twenty-four. But Jimmy calmed his nerves and made the winner in the next inning.

An avid freshwater fisherman, Jimmy spent his summers casting for bass. When the cold weather came, he could be found at Carom CafÃ© playing and kibitzing, or helping other players improve. He was active in the USBA, and sat on its board for a term. He was always looking for ways to support and grow the game.

He had many great stories about billiards. A favorite: he spoke often of the etiquette of the game when a player makes a fluke, usually holding up a hand to apologize to the opponent for the lucky shot. When Jimmy made a slop shot, he too would hold up his hand, palm out, to apologize, but Jimmy always said that gesture really meant he wanted five more billiards. â€œFive more,â€ thatâ€™s what that means, he would say with a smile. Nobody believed this, of course, though his license plate on his late-model car was â€œ5 More.â€ 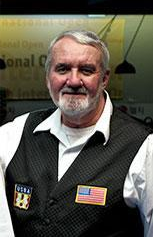 A real character and a nice sportsman, Jimmy will be missed.