Paul Drexler Inducted into the International Cuemakers Hall Of Fame 2020

Paul Drexler developed a love for wood working while helping in his grandfatherâ€™s cabinet shop as a kid. His passion for pool was equally intense, having grown up as a teenager in the New York pool scene of the 1950s and 60s. Drexler worked as a billiard table mechanic while he was an undergraduate at Syracuse University, setting up, restoring, and repairing antique tables. After many years of success in the corporate world, his love for pool and woodworking intertwined when he began building his own pool cues in his Marlborough, CT home in 1989. 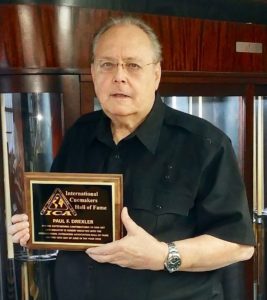 After traveling to California two years later and acquiring some hands-on experience with Hall of Fame cue maker Bert Schrager, Drexler transitioned to building cues full-time. Although he was in his early-40s when he ventured into cue construction â€“ a late-bloomer by industry standards â€“ Drexler rapidly became one of the top cue makers in the country. His background in the computer software business gave him a unique edge on producing artistic cues with Computer Numeral Controlled (CNC) equipment. In the late 90s, Paul set up an advanced system of computerized machines and began producing daring and unique cue designs that could only have been dreamed of previously.

Additionally, Drexlerâ€™s eye for quality exotic hardwoods, precious metals, gemstones and ivory combined to make his cues true works of art. He uses old school parquetry work mixed with modern inlay work to produce mind-blowing designs that have sold for tens of thousands of dollars worldwide. Paul developed his own style joint pin called Max Radial, which is a 5/16-10 joint pin that provides near 100-percent thread to wood surface contact and also was instrumental in the design of the Uniloc Joint.

His wife, Ellen, became involved in the design and inlay part of his cues and the couple began building cues under the name brand â€œpfd studios.â€ Their cues have won numerous awards including:

2001 Mermaid Cue gifted to the Smithsonian Museum in Washington DC