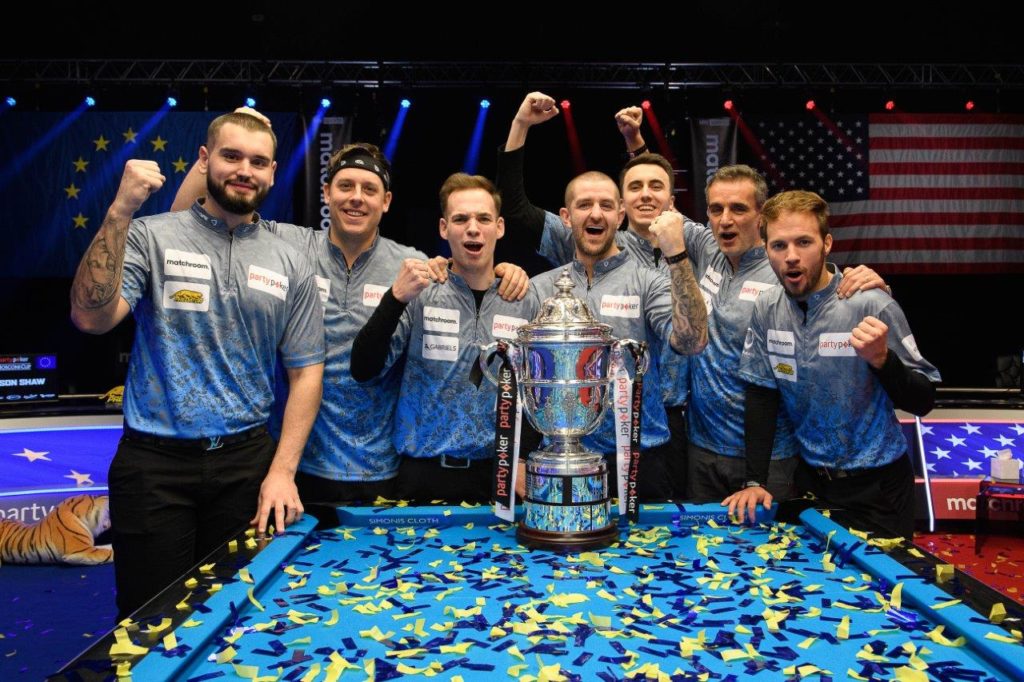 Europe regained the partypoker Mosconi Cup with an emphatic 11-3 victory over Team USA which was completed by MVP Jayson Shaw at Ricoh Arena, Coventry.

â€œIt feels great,â€ said Shaw, whose two singles and two doubles wins saw him become the first Brit to lift the Predator MVP trophy since Chris Melling in 2012. â€œI was feeling a little bit of pressure at the end there, but I played well to go 4-2 up, I really dug deep. I am delighted to win. 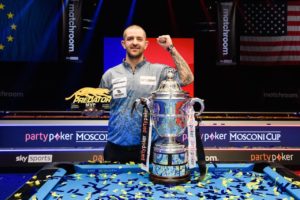 â€œIf that had been in front of 3,000 fans it would have been great, but we will still enjoy this. They played well the last two years; you have to take your hat off to them. This time around we jelled better as a team, we played better in the doubles matches, and won a lot more lags which was massive because a lot of fames came down to hill-hill.â€

â€œIt feels amazing,â€ said European captain Alex Lely. â€œIt has been quite a tussle; we have self-quarantined away from our families but we put a lot of work in and it paid off.

They are top of the bill, all young. Having lost the last two years, this is the start of a new era. These players will set the benchmark for the next ten years. There are so many new, young players coming through, so it isnâ€™t just these five players.â€

Team USA Captain Jeremy Jones said: â€œWe didnâ€™t get the outcome that we wanted. The Euros definitely outplayed us but I donâ€™t really think the score reflected how close the overall play was.

â€œAlex did a good job. Overall, I think his job is a little easier, I think he would tell you the same thing, especially with us losing Justin. Matchroom did a great job considering everything that was required to make this happen but we will leave and we will be thinking of winning the Cup again, not just some time, but we are going to win it back soon.â€

Europe had begun the day with an 8-2 lead, thanks largely to a 5-0 session whitewash of Team USA on Wednesday.

They moved a step closer to glory when Albin Ouschan and Joshua Filler beat Shane van Boening and Skyler Woodward 5-2 in Thursdayâ€™s opener. Joshua Filler then avenged the defeat he suffered to Woodward in the final match of last yearâ€™s Cup with an emphatic 5-0 victory.

That set the stage for Ouschan and debutant Fedor Gorst to seal the title for the hosts. Billy Thorpe and Chris Robinson were fighting though and took a 5-3 win to save this team the ignominy of equalling the record defeat suffered by USA in 2013.

That handed Shaw the chance to claim the Cup by beating Van Boening. The Scot had made the winning 9 in the 2016 event and despite a match which at times swung in favour of both players, it was Shaw who took Europeâ€™s 11th point of the week for their 13th partypoker Mosconi Cup title, the same number won by USA. 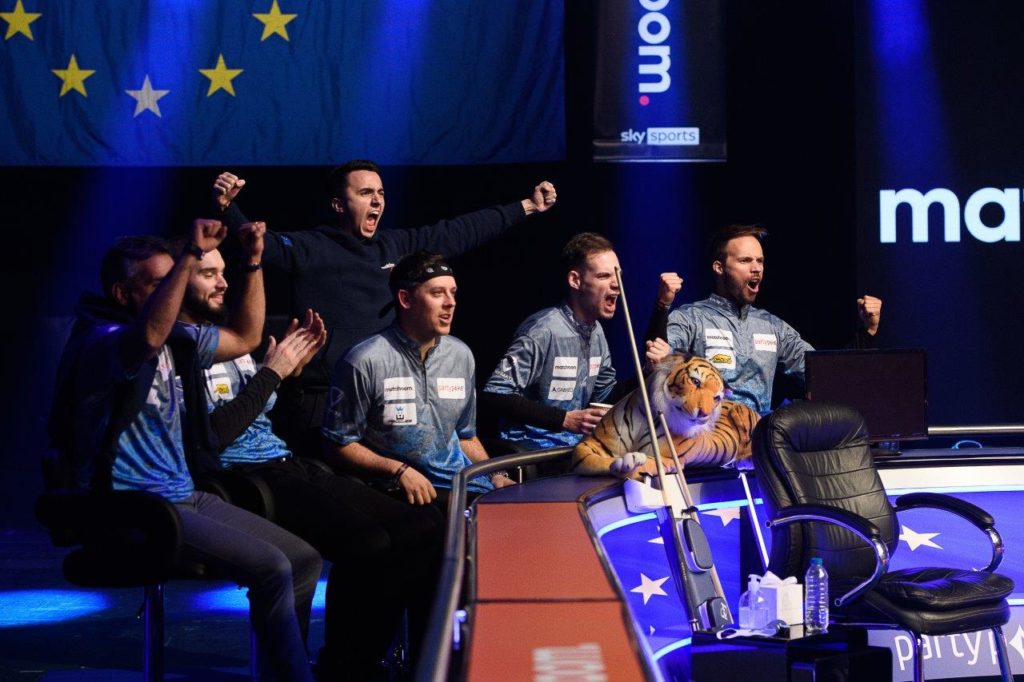 Europe are closing in on partypoker Mosconi Cup redemption having dominated the second day of play at Ricoh Arena, Coventry, live on Sky Sports Mix and DAZN.

â€œIt is a good scoreline and was great play,â€ said European Captain Alex Lely. â€œThere were a couple of hill-hill finishes and I am very content. 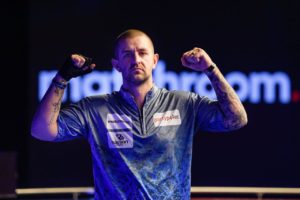 â€œJayson has looked so good from day one in our preparations when we gathered here four days before the event. He has been doing out in the arena what he has been doing in the practice toom.

â€œThey are champions, they know that they are entitled to a little celebration now but nothing over the top, just game on tomorrow to try and finish as quickly and clinically as we can because we will be up against a lot of those guys next year.â€

Europe had held a 3-2 lead at the end of an eventful opening day. The second session of play began with the Fansâ€™ Choice match, which saw Shaw nominated for Europe while Van Boening won the vote for USA.

As was the case in both singles matches on day one, the fixture went hill-hill. Shaw had come back from 3-1 down to level earlier in the match and had the advantage of breaking. After coming out on top in some early safety play, the Scot won the deciding rack to consign Van Boening to his third successive Fansâ€™ Choice defeat.

Another hill-hill followed, and again Shaw held his nerve for a European point. He and Filler were facing Woodward and Robinson, and breaking for the match the European duo ran out to give their team a 5-2 partypoker Mosconi Cup lead.

Europeâ€™s momentum continued into the third match of the evening as rookie Fedor Gorst dismissed Corey Deuel with an assured 5-2 victory. In the fourth match, Van Boening and Thorpe didnâ€™t do too much wrong but lost 5-4 to Ouschan and Kaci, leaving the hosts 7-2 ahead.

The whitewash was completed by Shaw, who defeated Thorpe 5-3 and has made himself a front-runner for the MVP crowd.

â€œLady Luck, sheâ€™s American but she wasnâ€™t in the building for us today,â€ said USA Captain Jeremy Jones.

â€œItâ€™s 9-ball pool, the break didnâ€™t work out for us, and you look at Shaw who won three points but made more mistakes than anybody in the building; thatâ€™s 9-ball, itâ€™s how it is. Our guys have to take advantage when advantage is there and keep fighting. 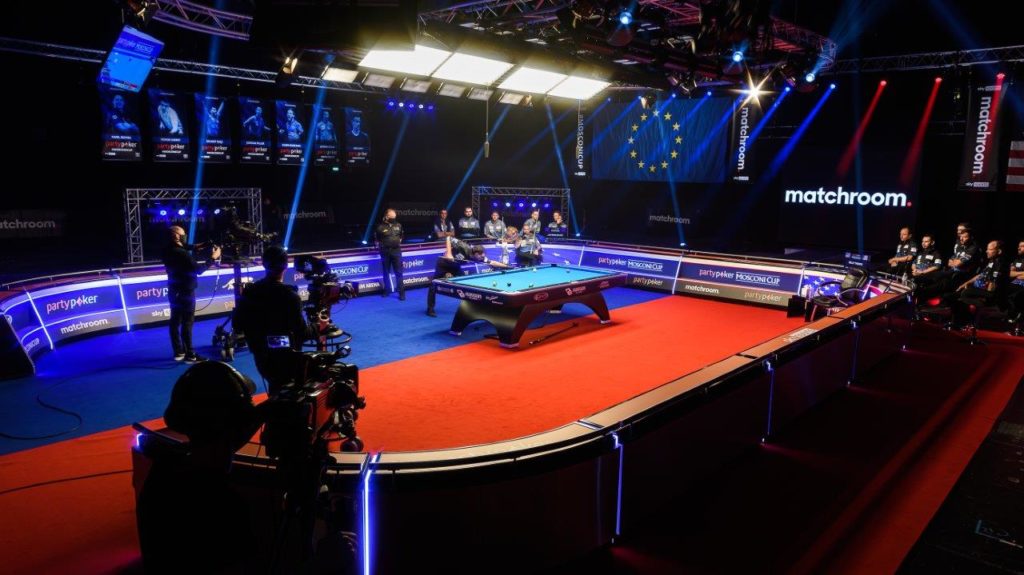 â€œWe will stay spirited and stick to the game-plan. A few individual game plans got away, and the process got away from them, but you can see they are fighting. Those guys made us come off an eight-year drought, they made that happen.

The partypoker Mosconi Cup continues on Thursday at 6:30pm (UK time), with live coverage continuing on Sky Sports Mix in the UK, DAZN in territories including USA, Germany and Austria and Match TV in Russia. Full broadcast details can be found at www.matchroompool.com.