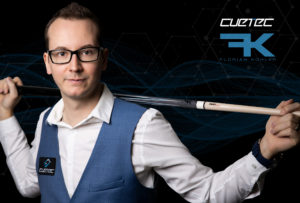 â€œIf there was one word that resonated with me the most after my initial conversation with Cuetec it was evolution. Cuetecâ€™s history and experience was of obvious importance, but where the company could go, and how I could be a part of that â€“ that was paramount in recognizing Cuetec was the best fit for me. So far, we are already off to a flying start and I canâ€™t wait to show-off some of the new gear Iâ€™ve been using and the upcoming AVID technology in development. My very first cue was a Cuetec, and Iâ€™m already in love with what is my first signature Cuetec AVID cue,â€ said Florian Kohler when asked about making the move to Cuetec.

â€œFlorian has the ability to connect with a very broad audience, beyond guys like me who are already in love with this game. He has charted his own course in many ways, and as Cuetec works on the next big leap, Florianâ€™s vision for expanding peopleâ€™s exposure to game is a perfect match. He has already been part of the development process for our new AVID platform, which will bring high-end performance and capability to the sub three-hundred dollar cue market,â€ said Kyle Nolan, Cuetec Brand Manager.

Cuetec burst onto the billiard scene in 1989, developing the composite cue. Today, Cuetec prides itself on offering the most technologically advanced wood and composite constructed cues and shafts, providing players with high-performance playing equipment at affordable prices. For more information, please visitÂ www.cuetec.com. Follow us on Facebook:Â https://www.facebook.com/CuetecUSA

Imperial is the exclusive distributor for Cuetec in the United States. Imperial and Cuetec work together to maintain that professional quality players and cherish. Imperial is the premier distributor of billiards equipment and licensed products from the NFL, MLB, NHL and several high-profile colleges and universities. With over 60 years of experience, Imperial has made a name in the industry with some of the most well-crafted pool tables and accessories on the market with price ranges to fit any budget. Add a huge assortment of licensed product and there is no other company that you will need to look to for your game room, dorm room and man cave needs. For more information, visitÂ http://www.imperialusa.com. Follow Imperial on Twitter, Facebook and Instagram @imperial_gameroom.